An Air Force F-16 pilot will face off against an AI adversary in a simulated dogfight. Here’s how you can watch it live 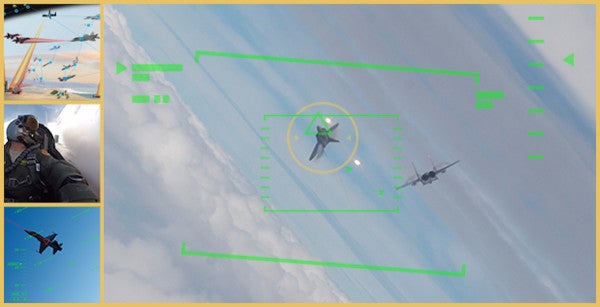 Mark your calendars, folks: The Air Force plans on pitting a seasoned F-16 fighter pilot against an artificial intelligence adversary for the first time in a simulated dogfight next week, according to the Defense Advanced Research Projects Agency, and you can watch the action live.

Between August 18th and 20th, DARPA plans on broadcasting its AlphaDogfight Trials that will see fighter pilots from across the U.S. armed forces face off against a variety of AI algorithms in “within-visual-range air combat maneuvering” — a dogfight.

The trials are designed “to energize and expand a base of AI developers for DARPA’s Air Combat Evolution (ACE) program,” according to DARPA, a program that seeks “to automate air-to-air combat and build human trust in AI as a step toward improved human-machine teaming.”

“We envision a future in which AI handles the split-second maneuvering during within-visual-range dogfights, keeping pilots safer and more effective as they orchestrate large numbers of unmanned systems into a web of overwhelming combat effects,” DARPA’s Strategic Technology Office program manager Col. Dan “Animal” Javorsek said in a 2019 press release.

You can register to watch the simulated combat, streamed live from the Johns Hopkins Applied Physics Laboratory (APL) in Laurel, Maryland, here until August 17th.

The third round of trials will see these eight teams fly their algorithms against three APL-developed adversary AI algorithms on the first day, August 18, before participating in a round-robin tournament to select the top-performing AI contenders on the second day, August 19.

On the final day, August 20, the top four teams will compete against an F-16 pilot in a single-elimination tournament to determine the winner of the “AlphaDogfight Trials Championship” — and, more importantly, determine whether an AI agent can successfully best a flesh-and-blood aviator in a dogfight.

“We are still excited to see how the AI algorithms perform against each other as well as a Weapons School-trained human and hope that fighter pilots from across the Air Force, Navy, and Marine Corps, as well as military leaders and members of the AI tech community, will register and watch online,” Javorsek said in a recent statement.

“It’s been amazing to see how far the teams have advanced AI for autonomous dogfighting in less than a year.”

You can watch footage from DARPA's previous two AlphaDogfight trials below, or learn more about the competition here. I'll be making popcorn.