Byron Booker, a 27-year-old sergeant who left the Army in May, has been charged with murdering Spc. Austin Hawk sometime in the early morning hours of June 17 at Fort Stewart in Georgia 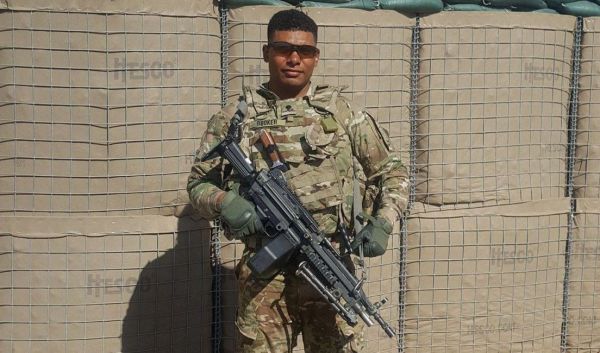 A former Army sergeant has been accused of fatally stabbing an active-duty specialist at an Army base in Georgia.

Byron Booker, a 27-year-old sergeant who left the Army in May, has been charged with murdering Spc. Austin Hawk sometime in the early morning hours of June 17. Hawk, 21, was found dead that morning in his Fort Stewart barracks room with “multiple stab wounds to his torso and a laceration to his head,” according to an incident report prepared by Army investigators.

Booker was arrested and charged with murder the day after Hawk was found dead, according to court records.

It remains unclear why the former soldier was on the base. Booker, a chemical, biological, radiological, and nuclear specialist who joined the Army in Feb. 2015, separated from the Army weeks prior to the alleged murder. He was last assigned to the 92nd Chemical Company, 83rd Chemical Battalion, the same unit as Hawk.

Fort Stewart officials would not say how Booker gained access to the base and declined to answer questions about security concerns in the barracks, citing an open investigation.

Hawk was also a chemical, biological, radiological, and nuclear specialist, according to Army records. He joined the service in July 2017.

After Hawk failed to report to morning formation on June 17, investigators used a master key to gain entry to his room and found the soldier lying unresponsive on the floor, according to the incident report. They found no signs of forcible entry. Hawk was later pronounced dead at Winn Army Community Hospital.

Investigators believe Hawk died sometime between 11 p.m. on June 16 and 6:45 a.m. on June 17, according to the report, which added that “witness statements revealed SPC Hawk had been playing an online video game until around 2300 on 16 Jun 20.”

In a victim impact statement filed with the court, Hawk’s grandmother Sandra Hodge called him “my hero, my love.”

“I am haunted by the horrible attack that took his life. His pain, his suffering must have been beyond belief,” Hodge wrote in the July 27 statement. “He was such a strong, amazing young man and had so much to look forward to. He had plans to finish his electrical engineering degree at Arizona State University.

“He was looking forward to beginning a new journey in life … I miss him so much, and the pain of his loss will never leave me,” she wrote.

The judge has authorized a $250,000 bond for Booker on Aug. 5, and allowed him to reside with his mother in Florida, according to court records. The judge further ordered Booker to wear an ankle monitor and abide by a curfew. Booker has not yet posted bond and remains in custody, his attorney said Thursday.

Booker did not respond to phone calls from Task & Purpose. His attorney declined to comment.

Correction: This article said Booker had been released on bond. It has been updated to reflect that Booker has been authorized bond but has not been released.