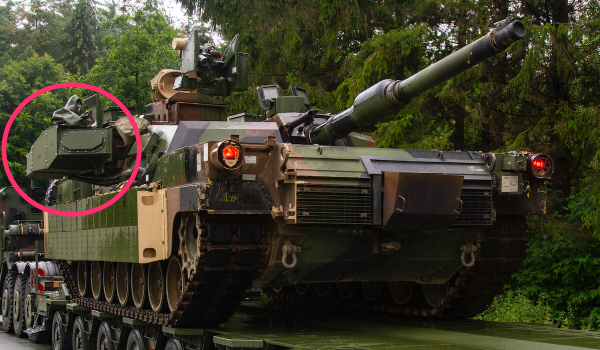 Army tanks deployed to Europe as part of the service's largest exercise in years are rocking a new piece of sophisticated military tech: an active protection system designed to protect against anti-tank missiles.

Photos released on July 10 ahead of the second phase of the Army's Defense Europe exercise show an M1 Abrams main battle tank rocking an Israeli-made Trophy Active Protection System (APS) as the vehicle is loaded onto a heavy equipment transport at the Bergen-Hohne Training Area in Germany.

According to a U.S. Army Europe spokesman, the 18th Military Police Brigade drew, installed and fielded the Trophy system from the Army Prepositioned Stock onto 8 M1A2 Abrams main battle tanks at the training area earlier this month

The Trophy APS is designed to intercept and destroy incoming anti-armor missiles and other guided rockets “with a shotgun-like blast,” as Army Recognition, which first reported the fielding of the system, put it.

The Trophy system “works by using radar to provide continuous 360-degree protection of the vehicle,” according to The National Interest. “Once a threat is detected, the system launches a 'tight pattern of explosively formed penetrators' that destroys the incoming round before impact.”

The Trophy system can also trace the origin of hostile fire to locate a potential adversary, allowing a tank crew to almost immediately return fire.

Leonardo and Rafael (lol) delivered their first Trophy APS to the Army in October 2019, the companies announced at the time, with plans to ultimately outfit four brigades of Abrams tanks with the anti-armor system.

First deployed on Israel's Merkava tanks in 2011, Rafael says that the Trophy APS is the only combat-proven system of its kind currently in service around the world, although Star and Stripes reports that multiple countries — including China, Ukraine, and South Korea — are developing similar systems.

The Army had previously planned on testing the system for the first time during the Defense Europe exercises, as Stars and Stripes reported at the time, although the global novel coronavirus (COVID-19) pandemic forced the U.S. and its allies to drastically scale back what was once billed as the largest European military exercise in decades.

It's unclear how many Abrams tanks deployed to Europe are currently outfitted with the Trophy APS. According to U.S. Army Europe, the installed systems were removed shortly after their installation.