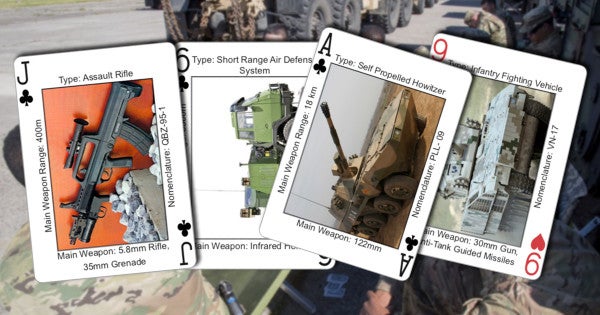 Soldiers will soon be getting a new deck of playing cards displaying Iranian and Russian weapons systems, because if you're going to waste time playing cards, you might as well learn something useful.

While training cards picturing Chinese equipment, weaponry and nomenclature have already been disseminated, the Army is still working on decks featuring Russian and Iranian equipment as well, according to Megan Reed, U.S. Army Training and Doctrine Command (TRADOC) spokeswoman.

One of the Chinese World Equipment Identification cards.Photo: TRADOC

“TRADOC developed the Equipment Identification Training Cards as an education tool to train the next generation of soldiers and leaders,” Reed told Task & Purpose.

“The cards depict equipment and weapons systems used by several countries identified in the National Defense Strategy. Historically, training identification cards have been used to assist soldiers in recognizing combat vehicles, equipment, and their capabilities.”

These cards may sound familiar — during the invasion of Iraq, playing cards were developed that featured the names and faces of the most-wanted members of the Iraqi government. The Russian and Iranian cards are expected to be available later this year.

The equipment cards can be requested by commanders through local Training Support Centers, Reed said, adding that approximately 33,000 sets of each deck of cards are expected to be produced. The Chinese cards feature systems like the Self Propelled Howitzer, Infantry Fighting Vehicle, Anti-tank Guided Missile, Combat Engineer Vehicle, and more.

All I know is, Go Fish just got a little more intense.