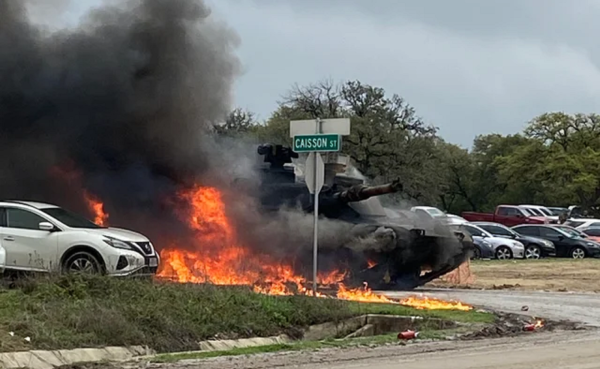 A photo of the flaming tank, which appears to have been taken just outside the unit's motor pool, began making the rounds on the r/Army subreddit on Friday, though the post has since been deleted.

Officials with Fort Hood confirmed to Task & Purpose that an investigation into the incident is underway. However, until the investigation is finished, it'll likely remain unclear how a multi-million dollar force of unstoppable destruction caught fire so suddenly.

“We are aware of the M1 Abrams tank fire, which occurred yesterday at Fort Hood, Texas,” Maj. Paul M. Oliver, a spokesman with the 1st Cavalry Division told Task & Purpose on Saturday.

“We can report that no injuries occurred as a result of the fire,” Oliver said. “The safety and well-being of the 1st Armored Brigade Combat Team is our top priority, and the incident is currently under investigation.”

The initial Reddit post suggested that the Abrams had a fuel leak that wasn't addressed, a claim that is being looked into as part of the ongoing investigation, Oliver told Task & Purpose.

Footage of the incident was provided to U.S. Army WTF Moments by four separate soldiers, Kenneth Ramos, a retired sergeant major and one of the administrators for the group, told Task & Purpose.

In one of the videos, a soldier appears to climb atop the burning tank, possibly to help one of the crew get free from the vehicle or to engage the Abram's fire suppression system.

Oliver told Task & Purpose that the soldier's actions will also be looked into as part of the investigation.

Given that the M1 Abrams' composite armor uses depleted uranium, which when burned can leave particulates that can be inhaled, the Army is also looking into whether the tank crew was exposed.

“The health of our 1st Cav Troopers is our top priority, and we are thankful that no serious injuries resulted from the fire,” Oliver said. “The extent of the damage and adverse of effects are all part of the on-going investigation.”