Army Pfc. Glendon Oakley Jr., the 23-year-old soldier who won praise from the the public, the Army and President Donald Trump for his heroism during a mass shooting at an El Paso Walmart in last year, was found dead in his quarters at Fort Bliss on Wednesday, officials said 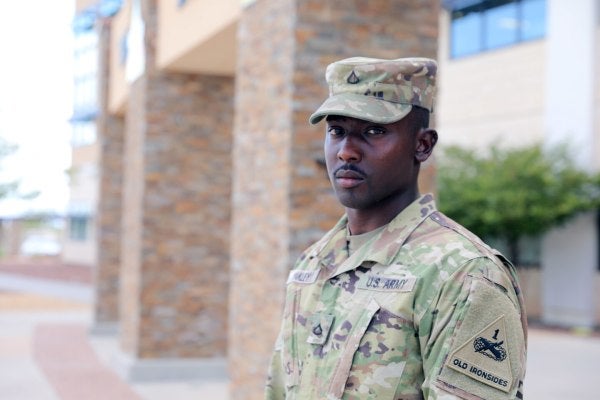 Army Pvt. Glendon Oakley Jr., the 23-year-old soldier who won praise from the  the public, the Army and President Donald Trump for his heroism during a mass shooting at an El Paso Walmart in last year, was found dead in his quarters at Fort Bliss on Wednesday, officials said.

Gilbert Telles Jr., a Fort Bliss spokesman, confirmed that Oakley was “found deceased in his on-post quarters” on Wednesday, adding that foul play is not suspected. His death is currently being investigated by Army Criminal Investigation Command.

“No further information will be released at this time to protect the integrity of the investigative process,” Telles said.

Oakley was credited with pulling several young children to safety when a gunman opened fire at the  Cielo Vista Mall in El Paso, Texas in August 2019.

In an interview with Task & Purpose shortly after the shooting, Oakley said that he pulled his Glock 9mm and followed a handful of employees as they headed for the mall exits when he spotted a group of children clustered in one of the mall's open play areas, screaming for their parents.

More than 20 people were killed during the shooting that day.

In recognition for his heroism, Oakley was awarded the Army Commendation Medal in an award ceremony at Fort Bliss several weeks after the shooting. In between, he found praise from Trump, who traveled to El Paso to meet with first responders in the aftermath of the incident.

“What a job he did,” Trump said of Oakley at the time. “You’ll be a movie star, the way you look.”

But in mid-September, the El Paso Police Department cast doubt on Oakley's account after reviewing surveillance footage from the incident.

The following month, Oakley was arrested in the city of Harker Heights, Texas on a deserter warrant for going absent without leave, as Army Master Sgt. Vin Stevens told Task & Purpose at the time.

It is unclear what, if any, disciplinary action was taken against Oakley following his arrest.

As Task & Purpose previously reported, Oakley was born into an Army family. His father, Glendon Oakley Sr., served for 31 years before retiring in 2011 at the rank of sergeant major; his mother, Wendolyn D. Oakley, retired as a master sergeant in 2001 after two decades; and his older sister, Glenda Oakley, is a retired captain.

Oakley took a circuitous route into the armed forces, eventually recruited into the Army with an ASVAB waiver due to his rough adolescence growing up in Killeen, Texas while the senior Oakley was stationed at Fort Hood.

Oakley went off to basic training in September 2017, graduating from Basic Combat Training and then Advanced Individual Training. around March 2018. A few months afterwards, he was deployed to Kuwait with the 504th; he'd been home from his deployment for just four months when gunshots rang out near the Cielo Vista Walmart.

When reached for comment following the receipt of his ARCOM, Oakley told Task & Purpose that he didn't want any more attention for his heroic actions.

“I don't want anymore articles or stories about me,” he said in a text message at the time. “I just want the attention to go away … I just did what I was supposed to do. I just want this to by (sic) past so I can go back to my normal life.”