Gov. Gary Herbert presented the Utah Medal of Valor to Sgt. Chasen Brown on Tuesday for saving the lives of a half-dozen bystanders after gunfire erupted at a music festival at the Mandalay Bay Hotel in October 2017 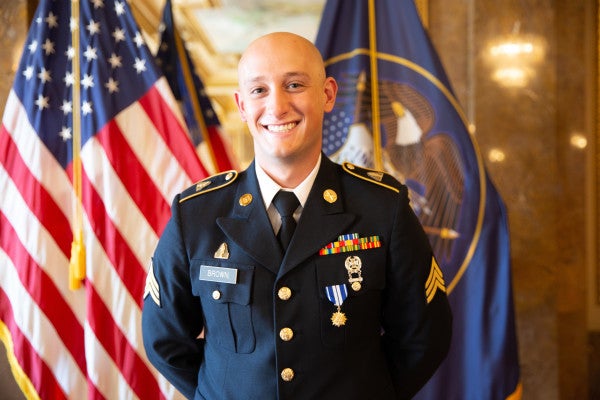 A Utah National Guard member was honored this week for risking his own life to save others during the deadliest mass shooting in United States history.

Gov. Gary Herbert presented the Utah Medal of Valor to Sgt. Chasen Brown on Tuesday for saving the lives of a half-dozen bystanders after gunfire erupted at a music festival at the Mandalay Bay Hotel in October 2017.

After one of his friends was shot, Brown “was able to render aid to him and take him out of danger, saving his life,” according to a UNG press release.

As the majority of the crowd fled the hail of bullets, Brown “went back time and time again, rendering aid to others wounded, all the while, under a constant barrage of gunfire, saving the lives of a half-dozen people” according to the release.

“For the next 60 to 90 minutes, Brown assessed casualties, assisted with evacuation efforts, rendered first aid by applying improvised tourniquets, bandages and pressure dressings made from the victim’s clothing, and helped emergency responders where he could,” according to the release. “At the end of the chaos, Brown found a bullet hole in this T-shirt, narrowly avoiding becoming a casualty himself.”

The Utah Medal of Valor is awarded to members of the Utah National Guard who demonstrate “extreme valor” and distinguish themselves “by courageous conduct at the risk of their own life and personal safety, above and beyond the call of duty,” according to a UNG press releases.

“Chasen’s heroic actions on that tragic day remind me of what I am most proud of regarding our Guard members — that they serve selflessly and bravely in the defense of our nation and its citizens,” Col. Steve Fairbourn, commander, 65th Field Artillery Brigade, said during the ceremony. “This dedication isn’t limited to when they are deployed, but rather is just a part of their character.”“

It shows that acts of valor don’t always happen in a combat situation,” Gov. Herbert said. “This is one of the civilian situations where he was National Guard trained and his own personal courage and moral compass had him act in a very courageous way.”