‘No Way To Really Protect Yourself’: Veterans Describe The Horror Of The Las Vegas Shooting

The Las Vegas Strip was plunged into chaos Sunday night when a lone gunman, 64-year-old Stephen Paddock, smashed the windows... 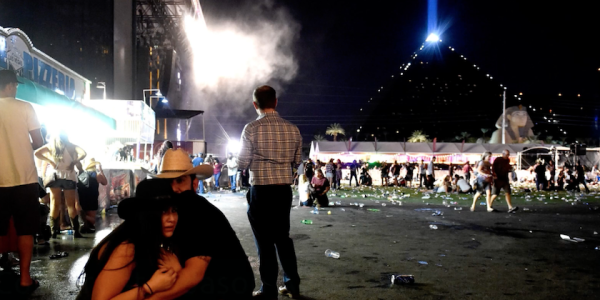 The Las Vegas Strip was plunged into chaos Sunday night when a lone gunman, 64-year-old Stephen Paddock, smashed the windows of his 32nd floor hotel room at the Mandalay Bay Resort and Casino and began firing down at a crowd of 22,000 people attending a country music festival roughly 500 yards away.

At least 59 people were killed and 527 injured in the shooting, making it the deadliest in modern American history. In an instant, Paddock, who ended his own life before law enforcement could reach him, transformed an epicenter of nightlife and entertainment into a blood-soaked battlefield.

Veterans of the wars in Iraq and Afghanistan were among the victims, and those who survived Paddock’s rampage have made the inevitable comparison between the experience of fighting a war overseas and living through a mass shooting back home. But judging by their accounts, few veterans of those wars have ever faced a situation so dire. What occurred in Vegas wasn’t a battle. It was a slaughter.

Navy vet Chris Roybal, who was killed in the Las Vegas shooting, in an undated Facebook postPhoto via Chris Roybal/Facebook

“I’ve done a lot of deployments in Iraq and Afghanistan and it’s kind of different because there was no way to really protect yourself,” Army veteran Jon Tampien told Spokane, Washington’s KHQ6 News. “In everything I’ve experienced with an assault rifle…usually they’re on the ground.”

Paddock, it was eventually discovered, had turned his suite into a makeshift sniper’s nest. Law enforcement officials found his corpse among more than 20 firearms, including AR-15-style rifles, along with “thousands” of rounds of ammunition. Two rifles, outfitted with scopes, were mounted on tripods.

“We had a little bit up towards Mosul, but nothing comparatively” Army Reservist Colin Donohue told Fox News of the combat he saw during a recent tour in Iraq. Donohue, who served with a search and rescue team in 2012, said he did what he was both trained to do and what he “was supposed to do”: he rushed into the fray to aid the wounded.

“Words can’t describe what was going on at the time,” Donohue told Fox News. “There was nothing I could do.”

Donohue wasn’t the only Iraq War veteran who reacted that way. 29-year-old Taylor Winston, a former Marine, told The Orange County Register that after fleeing the concert he commandeered an abandoned utility truck and returned to collect casualties.

“We started grabbing people and loading them in the truck,” Winston said. “Some were in critical condition. We took a full load to the hospital and then came back for more.”

Marine veteran Scott Yarmer of Colorado described the scene as “pretty much chaos” in an interview with Denver’s Fox 31. Yarmer said that while his military experience helped him maintain his composure, many others were frozen in fear.

“I wish we could’ve done more for some of the people there,” he said. “I tried to push people out because people kinda just wanted to stand there and figure out what was going on.”

Former Army Ranger Robert Ledbetter, a 42-year-old Iraq War veteran, had been close to the stage where musician Jason Aldean was closing out the festival when Paddock opened fire. As The New York Times notes, “audio recordings of the shooting suggest that at least one of Mr. Paddock’s weapons fired automatically.” Ledbetter’s brother and colleague were both seriously wounded.

“The rounds were all over,” Ledbetter told Los Angeles Times. “It could have come from anywhere.”

As Ledbetter fled the gunfire, they came across a man who appeared to have been shot in the leg. Ledbetter dressed the wound with a T-shirt and helped carry the man to a makeshift ambulance. The scene he described could’ve taken place on a roadside in Baghdad.

“There were five surrounding me that were combat medics doing the same thing I was doing,” he told Los Angeles Times. “Army veterans helping other veterans, helping people out.