When gunfire rained down on Las Vegas’ Route 91 Harvest festival in the late evening on Oct. 1, Marine Corps... 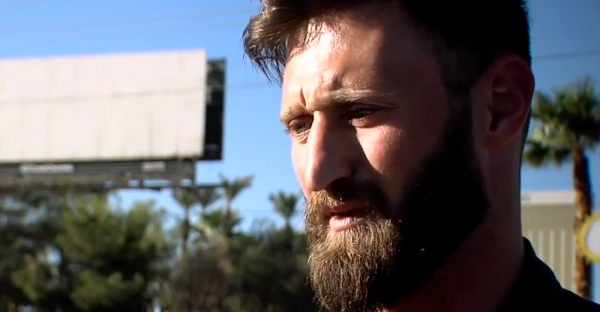 When gunfire rained down on Las Vegas’ Route 91 Harvest festival in the late evening on Oct. 1, Marine Corps veteran Taylor Winston sprung into action. Finding a nearby truck with the keys still in the ignition, Winston and a friend, Jenn Lewis, transformed the truck into an ad hoc ambulance and ferried as many as two dozen wounded attendees to the hospital during two trips, according to the Daily Beast.

Winston, a 29-year-old Iraq war vet, was standing near the righthand side of the stage when the shooting started. A staccato of gunfire erupted from the 32nd floor of the Mandalay Bay Resort and Casino, where the shooter, Stephen Paddock — armed with an arsenal of weapons, including at least two bump-stock devices that could have been used to modify a semiautomatic rifle for automatic fire — took aim at the concert attendees, Associated Press reports.

The shooting is the deadliest in U.S. history, leaving 59 dead and 527 wounded, but the toll might have been worse, if not for the heroic interventions of bystanders like Winston and Lewis.

As the opening salvo hit the crowd, Winston and Lewis ran for cover, but they didn’t flee the scene. Spotting an abandoned work truck near the stage, they commandeered the vehicle and headed back into the fray.

“We went back into the gunfire and started looking for priority victims, people with the most serious injuries, to get to the hospital,” Winston said in an interview with ABC 10 News.

“We started grabbing people and loading them in the truck,” Winston told Stars and Stripes. “Some were in critical condition. We took a full load to the hospital and then came back for more.”

In their two trips, Winston and Lewis loaded the wounded into the bed of the truck and the backseat, with Winston directing passengers to triage the gunshot victims, as he sped toward Desert Springs Hospital Medical Center — racing against time “before they bled out,” Winston told the Daily Beast.

After the second trip, ambulances and first responders arrived on scene and took over.

When contacted by the Daily Beast, Winston said he wasn’t sure how many of his passengers survived. “I can’t be for certain,” he said. “There’s a few that I don’t think probably made it. They were pretty limp when we were pulling them out of the truck, but they still had a pulse, so I’m hoping for the best.”

Winston served in the Marines from 2006 to 2011, deploying to Iraq as part of a police mentor team and serving aboard the USS Boxer, where he worked on helicopters during the Capt. Richard Phillips rescue mission, the Daily Beast reports.

As for his heroics, Winston remains humble, telling the Daily Beast that he was just assessing and triaging victims — moving quickly, and with a purpose.

“People needed to get out of there, and we tried the best we could to get as many as could,” Winston said. “I’m moreso just angry that someone did this, but I just gotta react. I can’t really dwell on it a whole lot.”

But Winston made it clear he wasn’t alone, telling ABC News: “There’s a lot of unsung heroes that day that stood up and helped people.”