Sgt. Bowe Bergdahl, the Army soldier who walked off his outpost in Afghanistan and into Taliban captivity for five years... 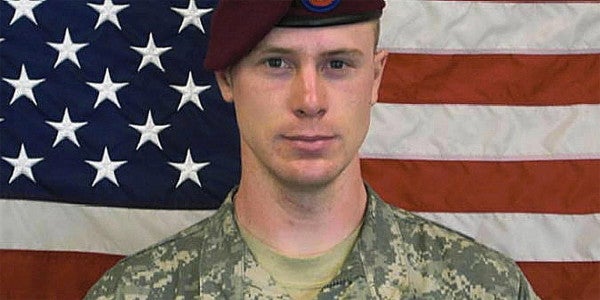 Sgt. Bowe Bergdahl, the Army soldier who walked off his outpost in Afghanistan and into Taliban captivity for five years before his rescue and controversial return to the United States, is expected to avoid a military trial by pleading guilty to “desertion and misbehavior before the enemy,” military sources told the Associated Press Oct. 6.

Bergdahl faces up to five years' imprisonment for the desertion charge and a possible life sentence for the misbehavior charge. The AP's sources told them that Bergdahl's sentencing phase would start on Oct. 23, and that “U.S. troops who were seriously wounded searching for Bergdahl in Afghanistan are expected to testify.”

Related: The Psychology Behind Strong Emotional Reactions To Bergdahl »

Bergdahl disappeared from his post in Paktika province on June 30, 2009, and immediately becamethe subject of a military and media shitstorm that continues to this day. He was quickly captured by Taliban fighters, who held him hostage for half a decade before his release in exchange for five Taliban prisoners held at Guantanamo Bay, who were sent to Yemen.

The public response to Bergdahl's captivityshifted with time and political winds. When he was captured, he got broad support on airwaves and social media as an American prisoner of war.

But as the Obama administration worked to secure Bergdahl's release to the United States, public opinion against Bergdahl swiftly turned.Details of his apparent desertion, and of casualties reportedly taken by soldiers on patrols to find him, emerged from veterans of the war in Afghanistan.

Some anti-Obama commentators,led by paid political consultants, trotted out those veterans and called for Bergdahl'sexecution for treason — a move that that tapped into real anger in the veteran community.

(Some of those same commentators, however, had earlier praised Bergdahl as a brave POW and assailed Obama for not doing more to get him home.)

The case against Bergdahl, most veterans agree, was always strong and obvious. “He deserted,” Nate Bethea, an Afghan veteran who served in Bergdahl's battalion,wrote in 2014. “I’ve talked to members of Bergdahl’s platoon — including the last Americans to see him before his capture. I’ve reviewed the relevant documents. That’s what happened.”

Related: Did Bergdahl’s Defense Team Reveal Its Strategy Too Soon? »

But desertion was also the tip of an iceberg in an eight-year story that seemed to carry all the confusion and mystery that comes with America’s wars. A trial could have turned up new details, not just on the case, but also on mismanagement of the war effort, according to Matt Farwell, who spent 16 months as a soldier in Eastern Afghanistan and whose book on the Bergdahl case, “American Cipher,” comes out next year.

“In a system with actual justice, the Bergdahl case wouldn't have just put a wayward private who never should've been in the Army on trial,” Farwell told Task & Purpose.

The case, he added, “was like a tuning fork striking bone, revealing stress fractures in the Army and war in Afghanistan.”