The Psychology Behind Strong Emotional Reactions To Bergdahl

Sgt. Bowe Bergdahl. Mentioning his name guarantees a visceral response from people in the military and veteran communities, eliciting a... 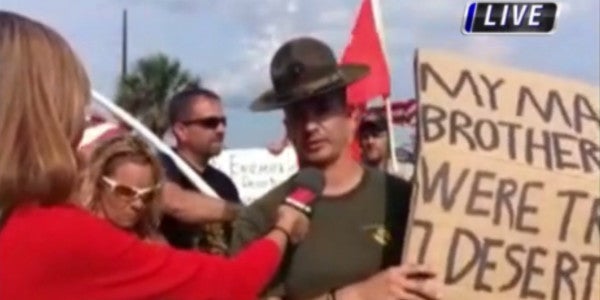 Sgt. Bowe Bergdahl. Mentioning his name guarantees a visceral response from people in the military and veteran communities, eliciting a “Fuck Bergdahl” retort or feelings of sympathy for what he endured during five years in captivity. One Army veteran of the Korengal Valley I spoke with recently said he had to stop listening to the Serial podcasts because Bergdahl’s voice caused him to grip the steering wheel so tightly out of anger that he risked driving off the road.

There are robust psychological explanations for the strength of the near-allergic reactions to any mention of Bergdahl and his alleged crimes. These feelings are now at a fevered level due to his impending court martial and the blazingly intense spotlight of Sarah Koenig’s Serial podcast, which is taking a microscopic look at the details surrounding Bergdahl’s alleged desertion, captivity, and return. So what explains our gut reactions to Bergdahl?

First, we need to recognize we’re operating in the realm of morality, which has limited overlap with the world of rationality. In the most recent episode of Task & Purpose Radio’s Serial-reflection podcast, James Weirick, remarking on the rawness of commentary about Bergdahl, stated that “it is as if most people don’t want to know the facts.”

The strong automatic responses to Bergdahl’s case typify the kinds of reactions within moral reasoning where research shows that we understand whether a situation is right or wrong before we engage our higher order reasoning processes. In essence, we decide that Bergdahl was either in the wrong or right first, then we interpret and marshal evidence to match that gut feeling. By the time deliberate thinking about Bergdahl’s situation is engaged, we’re not actually conducting dispassionate utilitarian and logical argumentation.

For example, those who think that Bergdahl is a deserter or a traitor are less likely to believe his story about wanting to cause a DUSTWUN in order to protest the state of leadership in his unit. Those who think that Bergdahl walked away from his post because he was a whistleblower lodging a legitimate protest against a bankrupt coalition effort in Afghanistan are more likely to think that he was justified in his actions. At this point in the moral reasoning process, those on either side of the argument are unlikely to listen to arguments from those with whom they disagree. Debate gets shut down with phrases such as “He’s just wrong” or “Come on, can’t you see he was trying to do good?” or “You’re just wrong, he’s a Taliban sympathizer, plain as day?!”

These phrases are an indicator that psychological bedrock has been struck by the argument shovel. The exact composition of this psychological bedrock varies somewhat from theory to theory, but like the geological variety, it forms the hard core of a person’s moral makeup. Scholars have coined the terms “protected” or “sacred values” to describe this immovable mental formation. For example, in one of the variants of the so-called “trolley problem” involves the choice of blocking a runaway passenger train car by pushing one person in front of it to save five people. When faced with this choice, some people respond that it is never okay to kill another person. Others might take a utilitarian approach and murder one person to prevent the deaths of five others. For the former, protected values (in this case the value of a life) and discussion of potential utilitarian trade offs generally results in denial of the possibility of making trade offs, feelings of anger, and ultimately incredulousness that not everyone shares the same moral fiber. These values are intellectually rooted in a philosophical branch of ethics called deontological theory, or Kantian ethics, which is absolutist in its dictates for what is morally permissible, required, and forbidden. Notably, absolutist variants of morality put duty to act and the act itself at the forefront, as opposed to the consequences of acting.

For the Bergdahl case, that means that he was morally wrong in his actions regardless of what he was trying to achieve by walking away from his platoon. Perhaps this is why those who consider him to be a deserter and traitor are quick to dismiss both his motives and to consider what happened to him in captivity. For those who may be among his staunchest and most sympathetic supporters, Bergdahl is given both the benefit of the doubt and perhaps ascribed heroic qualities for being willing to risk his life to make known his concerns about “leadership failures.”

It is also why so many people struggle to make sense of their own feelings in the case: Grappling with competing values (e.g., “I deeply believe in ‘leave no man behind,’ but Bergdahl was disloyal to his unit and buddy-fucked his platoon mates”) is not a comfortable psychological place to find yourself. Recognizing that these complex moral dilemmas are playing out and that most people naturally feel very strongly about the case is the first step to controlling strong feelings that interfere with logical debate. By being honest with ourselves about the moral bases for our disagreements, the military and veteran community can have a civil and necessary discussion about Bergdahl’s case.