The Navy Is Training Bomb-Sniffing Dolphins

Just off Key West, an elite team of Navy special operators have spent the last three weeks learning how to... 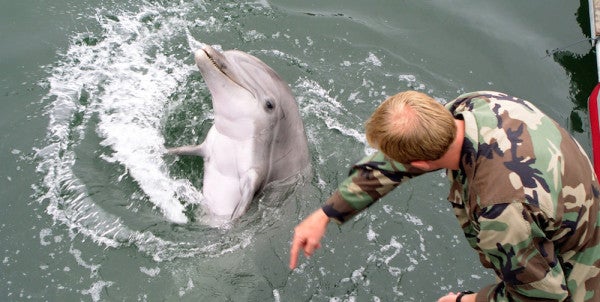 Just off Key West, an elite team of Navy special operators have spent the last three weeks learning how to sweep mines on the ocean floor. Their job is to drop transponders where the mines are located so mine countermeasures crews can safely retrieve them. And with any luck, they'll eliminate undersea mines as a threat to naval ships and personnel.

But these are no ordinary special operators: they're actually Atlantic bottlenose dolphins that serve in the Navy's Marine Mammal program, headquartered at SPAWAR Systems Center Pacific in San Diego.

“They're really good at finding stuff,” Bob Olds, business manager at the Marine Mammal program, told WLRN. “Probably their most impressive capability is their ability to find objects that are completely buried underneath the seafloor.”

The Marine Mammal program has been operational since the 1960s. In 1970, five Navy dolphins were deployed to ward off enemy swimmers around an Army ammo dump in Vietnam's Cam Ranh Bay. The Navy has deploying dolphins downrange to seek out mines since at least 2003, when they were used to expose mines in the Persian Gulf during the early months of the Iraq War.

The Marine Mammal program currently has 85 dolphins and 50 sea lions in its ranks, according to Business Insider, and the promise of $14 million a year in funding from the Pentagon through 2020. And with good reason, as Business Insider points out:

The sea mammals make attractive military assets because of their intelligence and trainability — as well as their speed in the water, and an echolocation ability that far outperforms the best electronic competitors. “The reason they're used is that they have abilities that are unmatched still by anything man-made,” [SPAWAR spokesman Ed] Budzyna said.

Dolphins emit vocalizations and then closely listen for how the sounds bounce back. That gives them an idea of their surroundings, and even lets them figure out what kind of metal they might be swimming near, according to a program spokesperson speaking with National Geographic News. This makes dolphins especially useful for identifying underwater mines.

Though the Navy hopes one day to replace living disposal teams with machines for the dangerous task of minesweeping, the dolphins are able to do what technology can't, using echolocation to find the mines on the seafloor.

“They're amazing, to watch these animals work and do the job that they do,” Cmdr. John Fairweather told WLRN. “They're part of the whole team of special operations and they have their niche to fill.”