Navy Shuts Down E-9 Selection Board Amid Allegations Of Wrongdoing

The Navy has halted the master chief selection board for the upcoming fiscal year and launched an investigation after officials... 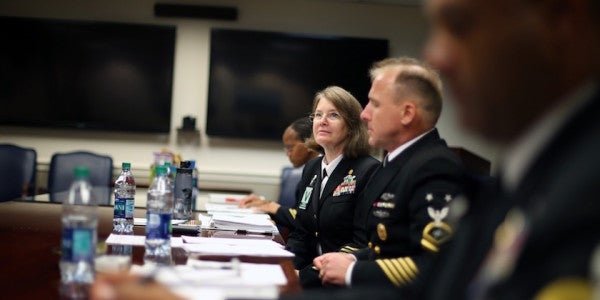 The Navy has halted the master chief selection board for the upcoming fiscal year and launched an investigation after officials were alerted that the process was allegedly compromised, Navy Times reports.

The board, which convened on April 3, was nearing completion when it was adjourned on April 12. According to Military.com, the Navy had discovered evidence that several board members had “acted improperly in a way that affected the process.”

No further details regarding the allegations are currently available and the investigation is ongoing. The last time an E-9 selection board was compromised was in 2012, when the Navy postponed the board for a month after its membership, quota plans, and convening orders were prematurely released. The leak was deemed accidental.

“All the members assigned to that board have departed and what we’ll have to do is convene a new board sometime later in the year,” Master Chief Petty Officer of the Navy Steven Giordano told Navy Times. “When that will be is yet to be determined.”

The E-9 selection board takes place once a year in Millington, Tennessee, and determines who will be promoted to the Navy’s highest enlisted rate. Members of the board take an oath pledging that they will review candidates “without prejudice or partiality,” and that they will not discuss the process with anyone not serving on the board.

Several of the 112 members for this year’s master chief selection board are now under investigation amid suspicions that they had inappropriate communication outside the board which may have influenced the process, according toMilitary.com.

Master chief selection boards typically take two weeks. This year, members were reviewing 3,418 eligible senior chief petty officers to fill 506 master chief positions across the fleet. Their work is now invalidated, and the Navy plans to reconvene a new board with all-new members later this year.

“The Navy’s board process is sacrosanct,” Lt. Cmdr. Nathan Christensen, a spokesman for the Chief of Naval Personnel, toldMilitary.com. “The selection board process must be a fair and impartial process.”