For almost six months, there was nothing. It was just Jennifer Appel, Tasha Fuiava, their dogs Zeus and Valentine, a... 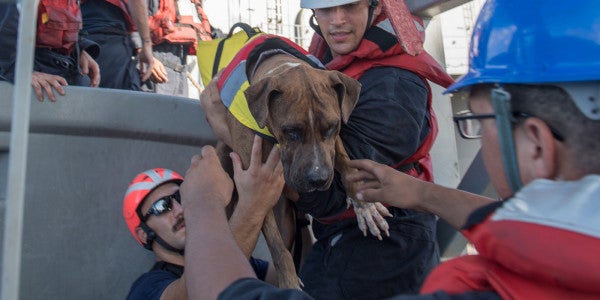 For almost six months, there was nothing. It was just Jennifer Appel, Tasha Fuiava, their dogs Zeus and Valentine, a busted marine engine, and the Pacific.

Appel and Fuiava had departed in a sailboat from Honolulu with their seaworthy pups on May 3, bound for Tahiti. They were well-equipped for the two-month southern journey, with a desalinator to make drinking water and plenty of dry provisions — rice, pasta, oatmeal. But a month in, their engine failed. They pressed on, but were clearly way off course. They radioed distress signals, but never got a reply.

On Oct. 25, after 176 days aimless at sea, Appel, Fuiava, Zeus, and Valentine were rescued by sailors from the amphibious docking ship USS Ashland (LSD 48), 900 miles off of Japan — and in a completely different cardinal direction from Tahiti.

Ship’s crew recorded the dramatic moments of first contact with the erstwhile sailors:

Operating near the area on a routine deployment, Ashland made best speed to the location of the vessel in the early morning on Oct. 25 and arrived on scene at 10:30 a.m that morning. After assessing the sailboat unseaworthy, Ashland crew members brought the distressed mariners and their two dogs aboard the ship at 1:18 p.m.

“It was incredibly emotional and it was so satisfying to know the men and women that serve our country would come and assist us,” Appel said in a post-rescue phone interview with Honolulu-based KHON-2 News:

Emotional is right. Though their sailboat was well-equipped, the Navy deemed it unseaworthy. Photos show a well-worn boat and crew — understandable, given the ordeal they faced. “You can’t get any help at all because you’re in the middle of nowhere,” Fuiava told KHON. “And if it falls apart around you, you’re swimming, and you’re shark bait.”

“It was very depressing. And it was very hopeless,” Appel said. “But the only thing you can do you use what you can and what you have. You have no other choice.”

The rescued sailors, tanned and now rested, are cruising on with Ashland and its crew until their next port of call. “I'm grateful for their service to our country,” Appel said in the Navy’s news release. “They saved our lives. The pride and smiles we had when we saw [U.S. Navy] on the horizon was pure relief.”

“The U.S. Navy is postured to assist any distressed mariner of any nationality during any type of situation,” he said.

Oh, and the dogs were fine, too.

A sailor greets Zeus the dog and his owner Tasha Fuiaba, left, on the boat deck of USS Ashland (LSD 48) after assistance was rendered to their distressed sailboat.U.S. Navy/Mass Communication Specialist 3rd Class Jonathan Clay