Oh, so you’re headed to Navy recruit training in Illinois next year? Fair winds and following seas — but don’t... 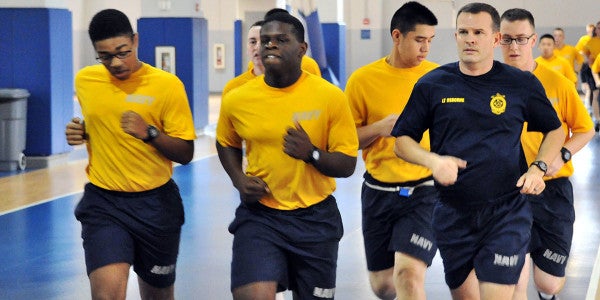 Oh, so you’re headed to Navy recruit training in Illinois next year? Fair winds and following seas — but don’t forget to do your stretches when you get there.

Starting on Jan. 1, 2018, all new recruits will be required to pass a run test in order to enter boot camp, the Navy announced on Nov. 15.

“It is the responsibility of each recruit to work hard and maintain all Navy standards,” Capt. Mike Garrick, the CO of the Navy’s Recruit Training Center in Great Lakes, Ill., said in a release. “Physical fitness is one of the greatest predictors of Sailor success. Before they arrive to boot camp, recruits are expected to train to meet the physical fitness standards.”

From here on out, aspiring sailors will have to clock a mile and a half on their initial Physical Fitness Assessment in under 16 minutes 10 seconds for men, under 18 minutes 7 seconds for women — that’s just to be able to train as a recruit for 8 weeks, after which they’ll be expected to attain a medium “satisfactory” score on their run, pushups, and curl-ups.

Recruits who don’t pass their initial run will get another chance within 48 hours. But if they fail that, they’ll be sent home with an ELS, an entry-level separation from the Navy that will require them to get a waiver if they want to try and enlist again.

The recruits who do pass will be “placed in groups based on their initial fitness abilities” when they officially enter boot camp, the Navy says.

“All military services have an initial physical fitness standard before recruits can commence basic training,” Rear Adm. Mike Bernacchi the commander of Naval Service Training Command, said in the release. “The initial run standard raises the bar at RTC, helping us develop tough, more qualified Sailors during basic military training and send a more lethal force to the fleet.”

For decades, the Navy’s motivated brethren in the Marine Corps have had to endure an “initial strength test” just to get through the door of the recruit training depot, with standards that include a maximum time of 13:30 for men to pass their 1.5-mile run — nearly three minutes faster than the new Navy cutoff. But hey, having a standard is a pretty good start.