Sailors are getting new incentives to stay in shape. The Navy announced June 20 that those sailors who perform in... 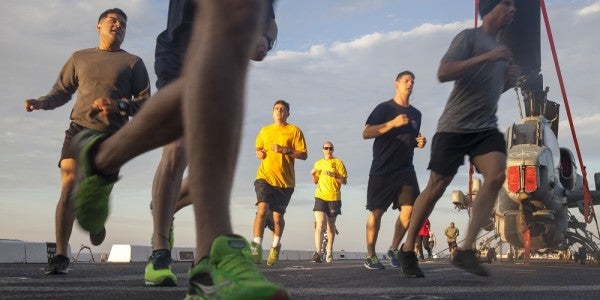 Sailors are getting new incentives to stay in shape. The Navy announced June 20 that those sailors who perform in the top tier of the service’s bi-annual physical readiness test will be exempt from taking their next PRT.

But there’s a catch. According to a Navy press release, sailors can skip an upcoming PRT if they:

Sailors typically have to take the PRT twice a year, once in the spring and once in the fall.

All sailors, regardless of their PRT performance, will have to participate in the body composition assessment, or BCA, each cycle. If a sailor performs well enough on the PRT to get an exemption but fails the BCA, then they also lose their exemption from the next PRT.

The message is: Don’t get fat.

The new requirements go into effect Jan. 1, 2018, but will be based on a sailor’s performance during the second PRT cycle in 2017. The changes were based on concerns and feedback from sailors across the service, according to the release.

“I want sailors to know we've heard them,” Chief of Naval Personnel Vice Adm. Robert Burke said in the release. “Many sailors work hard to maintain high levels of physical fitness year-round and I believe this provides an incentive to continue to excel. This effort is aimed at both incentivizing physical fitness and also reducing administrative distractions throughout the fleet.”

On top of those changes, the Navy announced that it will grant a six-month break from PRTs and BCAs for sailors returning from maternity or convalescent leave.

The service is also ditching the use of elliptical machines for the PRT’s cardio test portion, largely because nobody was using them. Fewer than 4% of sailors used an elliptical, and maintaining PRT-compliant elliptical machines was simply costing too much, according to the Navy’s release. I mean, the ground is free, guys.

The 1.5 mile run still remains the gold standard, but commanders are permitted to authorize the use of approved stationary bikes, treadmills, or allow sailors to swim instead.