A Congressman Wants To Rename The Navy And Marines. We Have Some Suggestions

The few, the proud, the Marines: the scrappy underdogs and red-headed stepchildren of the military. Expeditionary and small-war experts, zealous... 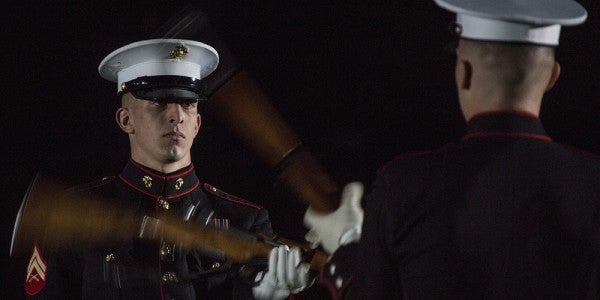 The few, the proud, the Marines: the scrappy underdogs and red-headed stepchildren of the military. Expeditionary and small-war experts, zealous in their commitment to Corps, country, and cause, and used to doing more with so much less, Marines are also besieged by breathtaking insecurities when it comes to their place in the military hierarchy.

Related: No, President Trump Is Not Splitting Up The Navy And Marine Corps »

As part of the House’s proposed National Defense Authorization Act of 2018, Jones included the name-change to symbolically elevate the Corps from its secondhand bureaucratic status. “The Marine Corps is an equal member of this department, and therefore, deserves equal recognition in its title,” Jones said in a June 29 statement.

Even if the name-upgrade goes through (and it probably won’t), it’s unlikely to have much of an impact on the Corps’ relationship with its parent branch… so if we’re just pitching a rebrand for the sake of ego, why not go all the way? Here are a few alternative suggestions:

1. The Department of Devils

A metal title with ample opportunity for leering devil-horned-skull logos, as well as service-issued Tap-Out skivvy shirts (Marines are gonna buy them anyway). The service could even adopt a new slogan: “Stacking bodies since 1775.”

2. The Department of Knuckle Draggers

How about we have some fun with stereotypes? Entry requires an ASVAB score of 32, and meritorious private first class enlistment is available for ASVAB waivers. Shit, let’s cut right to it and call it the Department of Crayola and Glue. The orange crayons taste the best.

If we’re going to placate ourselves with dreams of a name-change somehow altering the structure of the Corps, let’s just make the whole service nothing but salty E-3s with low-reg haircuts, full horseshoes of dip in their lips during a drunken three-mile run, and hands in pockets at all times.

It could function like the Department of Defense’s top-tier intelligence service for those times when you absolutely, positively need someone to track down a pirated copy of John Wick 3, score a log of Grizzly Wintergreen, or avoid getting busted in the latest barracks scandal. The logo would just be a pair of ice skates.

If these don’t sound good, then how about we just call it the Department of Mattis?

Personally, I think the Marine Corps is just fine as is. Besides, if the Marines are no longer a Department of the Navy, devil dogs across the Corps will lose out on this time honored jab: “Yeah, we’re the men’s department.”

*This story has been updated to clarify that Jones' proposal is part of a larger congressional bill whose chances for passage are not certain.