Soon, Marines Who Break The Rules May Have To Break Some Rocks With A Hammer

The Marine Corps is opening a labor camp in Okinawa to “award” informally disciplined Devil Dogs an opportunity to redeem... 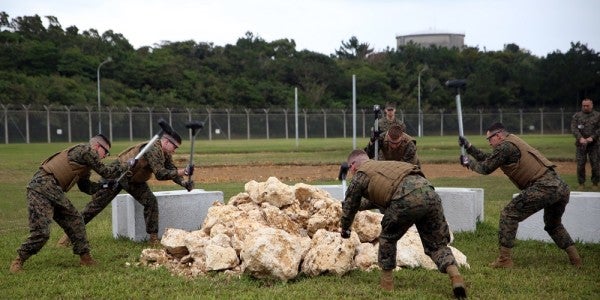 The Marine Corps is opening a labor camp in Okinawa to “award” informally disciplined Devil Dogs an opportunity to redeem themselves through their sweat and tears.

Camp Hansen’s Correctional Custody Unit is slated to open on Feb. 14, just in time for Valentine’s Day, Corps officials have announced. The program is meant to reduce the number of first-term Marines discharged for minor offenses by giving commanders an alternative to administrative separation when they dole out non-judicial punishments.

Stars and Stripes wrote about the unit in March 2003. The program was closed some time afterwards but it was not clear exactly when, said Chief Warrant Officer 5 Joseph Moschetto, corrections section head for Headquarters Marine Corps.

“In past years, CCUs could be normally found at major Marine Corps installations,” Moschetto told Task & Purpose on Wednesday. “However depending on deployment tempo, program demand, and other service specific variables such as personnel shortages or budget restraints, leverages whether the programs continues or not.”

Known as “awardees,” the Marines sent to correctional custody will go through a “rigorous physical fitness program” that includes breaking rocks with a sledge hammer, Moschetto said.

‘The rock pile’ is a form of team building and motivational strength training,” Moschetto said. “A small group of awardees swing sledgehammers to break rocks or concrete. Each swing is led, in cadence, in unison, with voice commands from the CCU instructor.

Breaking rocks is not “punitive punishment,” such as confinement or brig time as a result of a court-martial, Moschetto said. The purpose of correctional custody is “to correct the negative attitudes and motivations of junior enlisted members in order to allow them to meet their initial service obligations.”

When Marines attack the rock pile, they will have to wear protective glasses and gloves, as well as their combat utility uniforms, Moschetto said. They may also have to wear other protective gear. In a Jan. 12 demonstration at Camp Hansen, Marines in the brig broke rocks while wearing body armor.

“Local SOP and awardee population sizes will dictate scheduling of the rock pile,” Moschetto said. “Current planning is to integrate the rock pile once each Monday through Friday. Each awardee is limited to 25 strikes.”

Commanders can send Marines to the camp for either seven or 30 days as a form of administrative discipline, Corps officials said. Those Marines who go through the program receive a Page 11 entry in their service record book.

Unlike other forms of punishment, correctional custody is not meant to be career-ending for Marines, said Chief Warrant Officer 3 Brian Sheppard, brig commanding officer on Okinawa.

“I hope commanders take an honest look at this alternative because I see this program has great potential to mitigate first term discharges,” Sheppard said in a news release. “Restriction is not motivating. Extra duties are not motivating. Those Marines are negatively labeled, and for the most part see these punishments as career ending; this punishment alone is seldom corrective.”

Instead, Sheppard said, offending Marines deserved a real opportunity for redemption, and that opportunity was breaking rocks.

“Remove them from that state, send them to CCU, get them re-motivated,” he said, “and remind these men and women why they put their feet on the yellow footprints.”