Is The Air Force Still Secretly Plotting To Kill The A-10 Warthog?

The A-10 Warthog got a major boost from Secretary of the Air Force Heather Wilson at the end of 2017,... 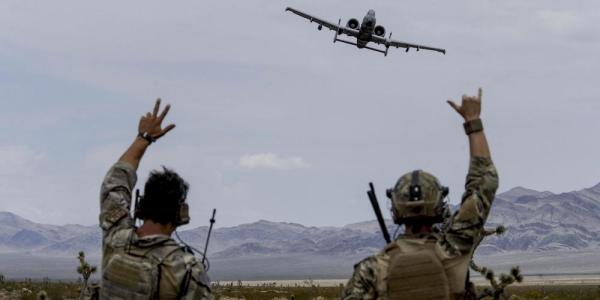 The A-10 Warthog got a major boost from Secretary of the Air Force Heather Wilson at the end of 2017, and Congress has told the service to overhaul the beloved light attack aircraft’s wings to extend its life by another 20 years. But internally, branch officials would prefer that the tank-killer jet up its wings for good, a new report suggests.

Civilian A-10 program manager Todd Mathes told roughly 100 officials in a recent meeting on the A-10 project that the Warthog’s multi-million dollar re-winging and rebirth simply “was not going to happen,” the Project on Government Oversight reports.

Mathes’ comments contrast sharply with Wilson’s commitment to the A-10 in testimony before the Senate Armed Services Committee last month. The 2018 defense budget had authorized $103 million to “add money to the Air Force budget to retool and open a line for wings,” Wilson said. “If that comes through, we will execute that and get that line started back up so that we can the first four or five sets of wings.”

“I happen to be a fan of the A-10,” the former Air Force officer added with a smile.

The POGO report on Mathes’ comments is based on interviews with meeting attendees who declined to be identified out of fear of retaliation by the Air Force. Two years ago, the vice commander Air Combat Command — the same command where Mathes works, according to POGO — told a group of airmen that writing their congressmen in support of the A-10 amounted to “committing treason.” That commander, a two-star general, was fired three months later following a branch IG investigation into his remarks.

“According to Mr. Mathes’s reported statements, as the wings wear out, the Air Force will allow the number of flyable A-10s to draw down to 171 aircraft,” POGO’s Dan Grazier, a former Marine officer, reports. “As the number of operational aircraft falls, so, too, will the number of A-10 squadrons, going from nine squadrons down to six. Six is exactly the number the USAF is planning for, according to Congressional testimony by Air Force Lieutenant Generals Jerry Harris and Arnold Bunch.”

Cantankerousness in Air Combat Command’s A-10 program office is just another wrinkle in the aircraft’s recent roller-coaster ride. The Air Force has been actively pushing to phase out the light attack craft in favor of the F-35 since at least March 2014, when the service issued a public affairs guidance on A-10 phaseout, decreeing that A-10 units “will not actively seek any media coverage” praising the aircraft. Two and a half years later, Gen. Ellen Pawlikowski of Air Force Materiel Command stated that the DoD planned on funding the aircraft “indefinitely.”

But after the Pentagon released a FY 2018 budget proposal that would fully fund “the entire fleet of 283 A-10 Thunderbolt IIs,” Bunch testified to the House Armed Services Committee in June that the Air Force planned on reducing its force structure to six squadrons, drawing ire from Republican Rep. Martha McSally of Arizona. “It’s the first time you’ve publicly said that you are going to go down to six squadrons,” McSally — a former A-10 pilot and current Senate candidate — told Bunch. “I’d really like to know what those planning assumptions are of the six squadrons.”

“We don't know if [Mathes'] statement was made as it was reported, or, if it was, what the context was. So it's difficult to provide any kind of clarification,” ACC public affairs director Col. Tadd Sholtis told Task & Purpose when reached for comment. “Because of persistent budget uncertainty and the nature of the budget cycle, the current status of the program can only be based on what we know, which is this: pending approval of the FY18 appropriation, the Air Force plans to use the $103 million authorized in the FY18 NDAA to award a contract, establish a new wing production line and produce four additional A-10 wings, which is all that money funds.”

So for now, the Warthog’s future remains cloudy — but one thing is clear: As long as the A-10 remains on the chopping block, folks like Grazier’s sources and McSally will clearly do whatever it takes to convince lawmakers and the American public it shouldn’t be.

UPDATE: This story was updated to include a statement from Air Combat Command Director of Public Affairs Col. Tadd Sholtis who responded to Task & Purpose’s comment request after the story published. (1/18/2018; 12:23 pm)