“I knew then that I had to go get to my teammates and help them." 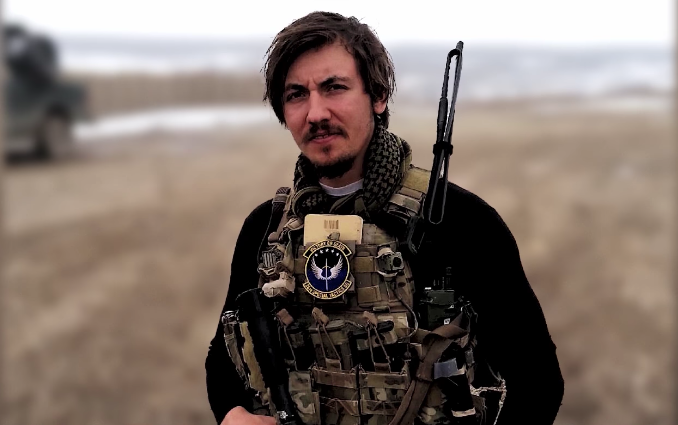 Air Force Staff Sgt. Alaxey Germanovich during his first deployment to Afghanistan, while he was still a senior airman. Germanovich was awarded an Air Force Cross for saving a Green Beret team during a desperate firefight on April 8, 2017. (Facebook / Air Force Special Operations Command).
SHARE

New details revealed at an award ceremony honoring Staff Sgt. Alaxey Germanovich show just how close the Special Tactics airman and his Army Special Forces teammates came to disaster during a 2017 mission in Afghanistan — and just how important Germanovich’s actions were to change the outcome.

“I said ‘if you don’t come back, we’re dead,’” Germanovich recalled telling the crew of a AC-130U Spooky gunship in the middle of the pitched battle. The airman was awarded the Air Force Cross, a medal second only to the Medal of Honor, by Secretary of the Air Force Barbara Barrett at Cannon Air Force Base, New Mexico on Thursday.

A combat controller from the 26th Special Tactics Squadron, Germanovich’s job was to coordinate air support as he, his Army buddies and a crew of Afghan commandos forced anti-coalition fighters out of several valleys in Nangarhar Province in northwest Afghanistan. The multi-day mission grew more and more violent until one day, April 8, Germanovich woke up to the sound of machine-gun fire and spotted his American teammates pinned down behind a rock, beset on all sides by effective enemy fire.

“I knew then that I had to go get to my teammates and help them,” the airman said. And help he did. After reaching the rock, Germanovich exposed himself to enemy sniper and machine gun fire so he could call in airstrikes to suppress the enemy attack.

“It was working to a degree,” said Germanovich, who was a senior airman at the time. “But we were still receiving extremely effective fire, and one of our partner force members had gotten shot.”

They had to get the wounded Afghan commando out of there, so the airman called in airstrikes extremely close to their position to carve some space between them and the enemy fighters.

“As the bombs were falling out of the sky, I started screaming at everybody to run for cover,” Germanovich said.

Eventually they managed to evacuate the Afghan commando, and then it was time to launch a counter-attack. A separate unit across the valley pinpointed an enemy bunker and Germanovich’s elements crawled their way towards it. The team leader, Army Staff Sgt. Mark De Alencar, of the 7th Special Forces Group (Airborne), led the way and dropped grenades into the bunker entrance. But the team was ambushed and De Alencar was mortally wounded.

“The situation just became complete and utter chaos,” said Germanovich. “The team and I had expended all of our ordnance engaging enemy targets. We expended all of our grenades, there was no more pistol ammunition, and we were out of ammo completely.”

Lying prone with no cover, Germanovich called the AC-130U Spooky gunship, which at the time was leaving the area to refuel. Once the aircrew heard the airman’s desperate plea, the gunship returned and fired on the enemy fighters, giving the Americans time to move away and evacuate De Alencar. According to an initial press release, Germanovich directed his team’s withdrawal, then traversed 700 meters carrying a casualty up a mountain to a helicopter landing zone while directing close air support.

“All the while, we’re still taking effective fire from the enemy,” said Germanovich. “We began dropping ordnance and basically bombing up this mountainside until we got to safety.”

De Alencar died of his wounds, and those present at the award ceremony did memorial pushups to honor his sacrifice. More may have joined him if not for Germanovich’s actions that day. The airman is credited with protecting over 150 friendly forces and destroying 11 enemy fighting positions during the eight-hour battle. Still, Germanovich said it was a team effort to make it home from that battle.

“It was a perfect storm and a perfect group of guys to be there with,” he added in a Facebook video posted by the Air Force Special Operations Command.

For Germanovich, the firefight also underscored how vital every piece of the Air Force machine is in combat. The night before the battle, Air Force mechanics worked all night to make sure the AC-130U that covered them was ready to fly, he said.

“The next day, when we got in that horrible ambush, had that plane not flown, I probably wouldn’t be here,” he explained. “Every single piece that might seem super-nuanced or whatever is generally unbelievably important.”

Germanovich has been preparing for moments like that for a long time. A Boiling Springs, South Carolina native, he enlisted in the Air Force in 2012 with two goals in mind.

“I always knew I wanted a challenge,” he said. “I wanted to have a direct impact on the battlefield wherever I went.”

And the special operations community benefited from him being there.

“You (Germanovich) told me earlier that you did what any one of your teammates would have done in the same situation,” said Col. Matthew Allen, 24th Special Operations Wing commander. “But we don’t know that. We do know what you did that day: face and devastate a numerically superior enemy … this is why America’s enemies do not take us head on.”

“This Air Force Cross is a tribute to your persistence,” she said. “You risked your life and weathered blistering enemy fire to save the lives of others.”

Germanovich is the 12th Special Tactics Airman to receive the Air Force Cross since Sept. 11, 2001.