Unsung Heroes: The ‘Javelin Aces’ Who Laid Waste To An Iraqi Armored Unit

During the 2003 invasion of Iraq, while the bulk of American forces entered the country from Kuwait, battling their way... 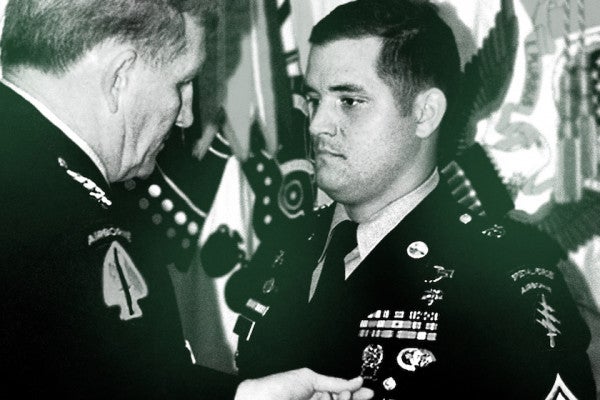 During the 2003 invasion of Iraq, while the bulk of American forces entered the country from Kuwait, battling their way through cities like Basra and Najaf en route to Baghdad, a smaller contingent entered from the north. Among them was the 3rd Special Forces Group, which, on the 18th day of the war, engaged in the first major offensive by American forces moving from Kurdistan into government-controlled territory of northern Iraq.

Their mission: to sever Highway 2 and prevent the Iraqi army from reaching the oil fields in Kirkuk.

Even after 13 years of combat operations in the Middle East, one would be hard-pressed to find a story that better highlights the effectiveness of the U.S. Army Special Forces as a small and agile elite fighting force. And it all hinges on the heroic actions of two men: Staff Sgt. Jason D. Brown and Staff Sgt. Jeffrey M. Adamec, who’d both donned the Green Beret for the first time less than a year before.

Officially, the skirmish was called the battle of Debecka Pass. But among the commandos on the ground on that day, it became known as “the Alamo.” And for good reason: The battle pitted 26 Green Berets and their Kurdish allies against a substantially larger and much better-equipped Iraqi force. A 3rd Group company commander later estimated that the Americans were outnumbered 30 to 1.

On the morning of April 6, after taking their first objective, a crossroads near the village of Debecka, the Green Berets decided to push deeper into enemy territory. But their advance was abruptly halted by a phalanx of Iraqi armored personnel carriers, troop trucks, and four T-55 main battle tanks, which opened up on the Americans, who returned fire with a .50 caliber machine gun.

Fearing they’d be overrun, the Green Berets decided to fall back, taking up position on a nearby ridgeline as artillery, tank shells, and mortars rained down, exploding close enough to shower the men with dirt.

Adamec and Brown dismounted their vehicles and began firing shoulder-fired Javelin antitank missiles at the enemy, eliminating a total of four armored personnel carriers and two troop transports. Sgt. 1st Class Frank R. Antenori, a Green Beret team leader who’d eventually go on to serve in the Arizona State Senate, used a Javelin to take out one of the four T-55 tanks. Another Javelin-wielding commando did the same.

The firefight raged for four and a half hours, during which time the intensity of the combat began to take a psychological toll on both sides of the fight. At one point, an Air Force tactical air controller attached to the Green Berets called in an airstrike. It missed the intended target and instead hit an abandoned tank where a group of Kurdish soldiers had convened, killing 17 people and wounding 45, including a BBC correspondent.

Still, the Americans continued to gain the upper hand, sowing discord within the enemy ranks and drawing more than a dozen Iraqi soldiers from their fighting positions in surrender. However, the surrendering soldiers were immediately executed by a group of men in white robes who suddenly arrived on the scene in a pair of SUVs. The commandos, who watched the massacre through their binoculars, figured the men were enforcers for the Saddam regime, so they called in another air strike. This time, it didn’t miss.

The commandos held their position for three more days under a constant bombardment of artillery and mortars, but, ultimately, Highway 2 was severed, the Kirkuk oil fields were secured, and countless Iraqi soldiers were either dead or injured. For their actions during the battle, Brown and Adamec were awarded the Silver Star, as well as a nickname within the Special Forces community: the “Javelin aces.”