UNSUNG HEROES: The Pilot Who Stopped An Ambush On A Special Operations Team

From the cockpit of his F-16 Fighting Falcon, Capt. John Caldwell could see the flashes of mortar fire in the... 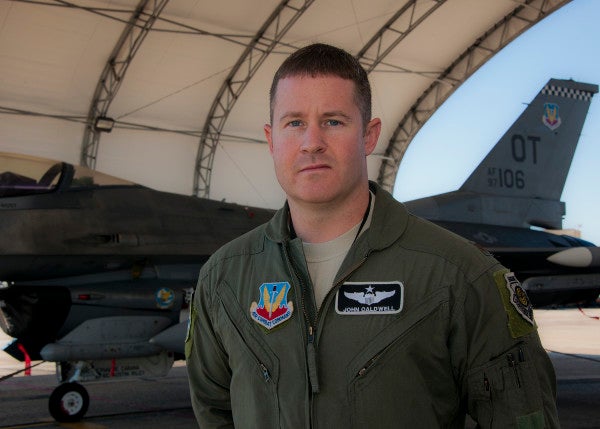 From the cockpit of his F-16 Fighting Falcon, Capt. John Caldwell could see the flashes of mortar fire in the Afghan mountainside. It was the Taliban executing a complex ambush on a special operations team in Nuristan province, Afghanistan.

Caldwell was responding to a call for air support from the special operations team, who had already taken casualties in the May 2, 2011, ambush. It was a hellish ambush, with more than 90 Taliban fighters assaulting a small team of American and coalition special operators. By the end of the difficult day, six American and coalition forces would be killed in action. But Caldwell’s actions in his F-16 allowed the special operators to regroup and neutralize the ambush, according to Department of Defense reports.

It was a dark night, difficult for Caldwell to distinguish Taliban forces from the American forces under ambush, difficult for those commandos on the ground to determine where the assault was coming from. But staring out of the canopy in his fighter jet, Caldwell could see those flashes of mortar fire. It was all anyone had to zero in on the position of the Taliban forces. From those flashes of light, Caldwell derived coordinates on the location of the Taliban fighters. He dispatched another aircraft on scene to drop a bomb on the Taliban position, that aircraft successfully struck its target, then had to refuel. This left Caldwell’s aircraft as the only kinetic asset on scene, according to an Air Force report.

He coordinated medical evacuations and relayed real-time intelligence to operations headquarters. He received permission to deploy any ordnance necessary to protect the American forces. And so Caldwell launched a strafe with his 20mm cannon described by military reports as “danger close.” He risked his life, taking his aircraft low into the dark valley to separate the Americans and Taliban forces.

For his heroism that day, Caldwell was awarded the Distinguished Flying Cross, the seventh-highest medal in order of preference for the U.S. military, awarded for, “heroism or extraordinary achievement while participating in an aerial flight.”

Though he risked his own life and was instrumental in saving American lives that day, Caldwell said in the Air Force report that he does not consider himself a hero.

“Sadly, there were six American and coalition forces I couldn't help that day; they are the true heroes,” said Caldwell. “I was at the right place at the right time and I believe anyone in my squadron would do the same thing.”