LGBT Advocates Liked What They Heard From Mattis

Retired Marine Corps Gen. James Mattis faced his confirmation hearing for the post of Defense secretary on Jan. 12, where... 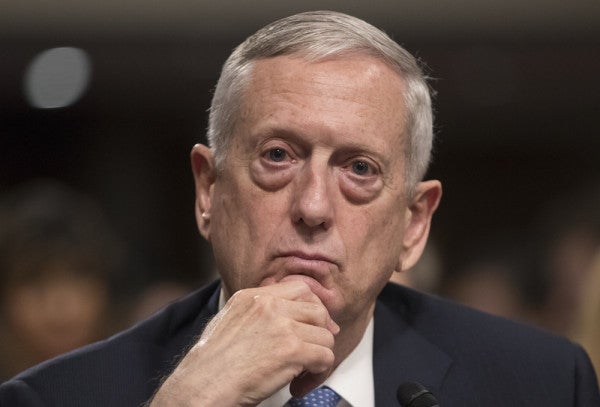 Retired Marine Corps Gen. James Mattis faced his confirmation hearing for the post of Defense secretary on Jan. 12, where he was grilled on his positions on women and LGBT service members. But advocacy groups are pleasantly surprised to hear that Mattis pledged that he won’t be undoing the work of his predecessors in making the military a place of equal opportunity.

“We are heartened by General Mattis’ stated commitment during his testimony not to reverse the profound progress we have made in ensuring LGBT service members and their families are able to serve our nation with pride,” American Military Partner Association president Ashley Broadway-Mack and OutServe-SLDN executive director Matt Thorn wrote in a joint statement.

“Frankly, Senator I’ve never cared much about two consenting adults and who they go to bed with,” he told Democratic New York Sen. Kirsten Gillibrand in his testimony.

Sen. Mazie Hirono, a Democrat from Hawaii, bluntly pressed Mattis on the issue, asking, “Is there something innate in being a woman or LGBT that would cause you to believe that they could not be part of a lethal force?”

Much of the initial concern about his stance came from a 2014 speech at the Marines' Memorial Club in San Francisco, where Mattis said, “The idea of putting women in there is not setting them up for success. It would only be someone who never crossed the line of departure into close quarters fighting that would ever even promote such an idea.”

He also co-edited a book with Hoover Institution colleague Kori Schake in 2016 on the dangers of imposing social issues on the military, like women in combat and LGBT service members.

However, Mattis suggested his position on the issue has evolved.

“We open the door to all patriots who are eligible and meet the standards, provide them with the training, equipment, and leadership that's central to their success, and ensure all service members are treated with dignity and respect,” he said during his prepared remarks.