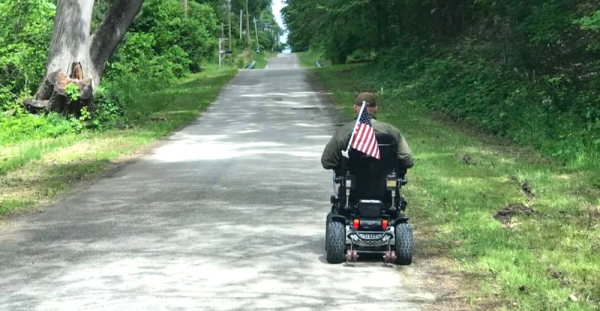 Former Army military police Sgt. Josh Geartz is riding 422 miles to raise awareness about the 20 veterans who take their own lives every day, according to the latest Department of Veterans Affairs data. He chose 422 miles deliberately to represent the formerly held figure, which suggested that 22 veterans a day are lost to suicide.

But unlike other veterans who participate in similar treks, he isn’t running, or riding on a bicycle, or swimming. Instead, Geartz is riding in his wheelchair.

Geartz learned firsthand what it means to be a veteran battling suicidal ideation. After joining the Army in 1999, he was hit by an improvised explosive device in September 2003 while deployed in Iraq during the invasion. His injuries left him with partial paralysis in both legs, numerous blood clots, spinal stenosis, and after battling traumatic brain injury and post-traumatic stress disorder for more than a decade, Geartz decided in 2014 that he did not want to live.

“Being one of the first guys coming back from the invasion in Iraq, the VA didn’t really know too much, and they didn’t know how to treat TBI,” Geartz told Task & Purpose. “You don’t want to reach out to your friends because you’re embarrassed about how you’re living, and that’s how I felt.”

After one failed suicide attempt, Geartz considered a second.

“Everything was just so overwhelming,” Geartz told Newsmax. “It came to a point when I had to admit that I wasn’t able to care for myself or my son. That was the hardest thing that I ever had to do. I had been through countless therapies, programs and other treatments. Nothing seemed to help.”

Geartz credits two veteran service organizations, SongwritingWith:Soldiers and Team Red, White & Blue,with saving his life. “Fortunately, just in time, I found something that gave me reason to live,” Geartz explained on the crowdfunding page for his journey.

To pay it forward, Geartz riding his wheelchair in this 422-mile marathon along the Great Lakes from Indiana to New York while trying to drum up awareness about veteran suicide and raise money for the two organizations that gave him his life back.

Geartz has a Google map with all the legs of his route tagged, and updates his “422 for 22” Facebook page daily to record his progress.

As for dealing with TBI and PTSD, Geartz said, “You’ve got to get uncomfortable. You have to take care of yourself if you want to be good to other people.”