This isn't your average ride. 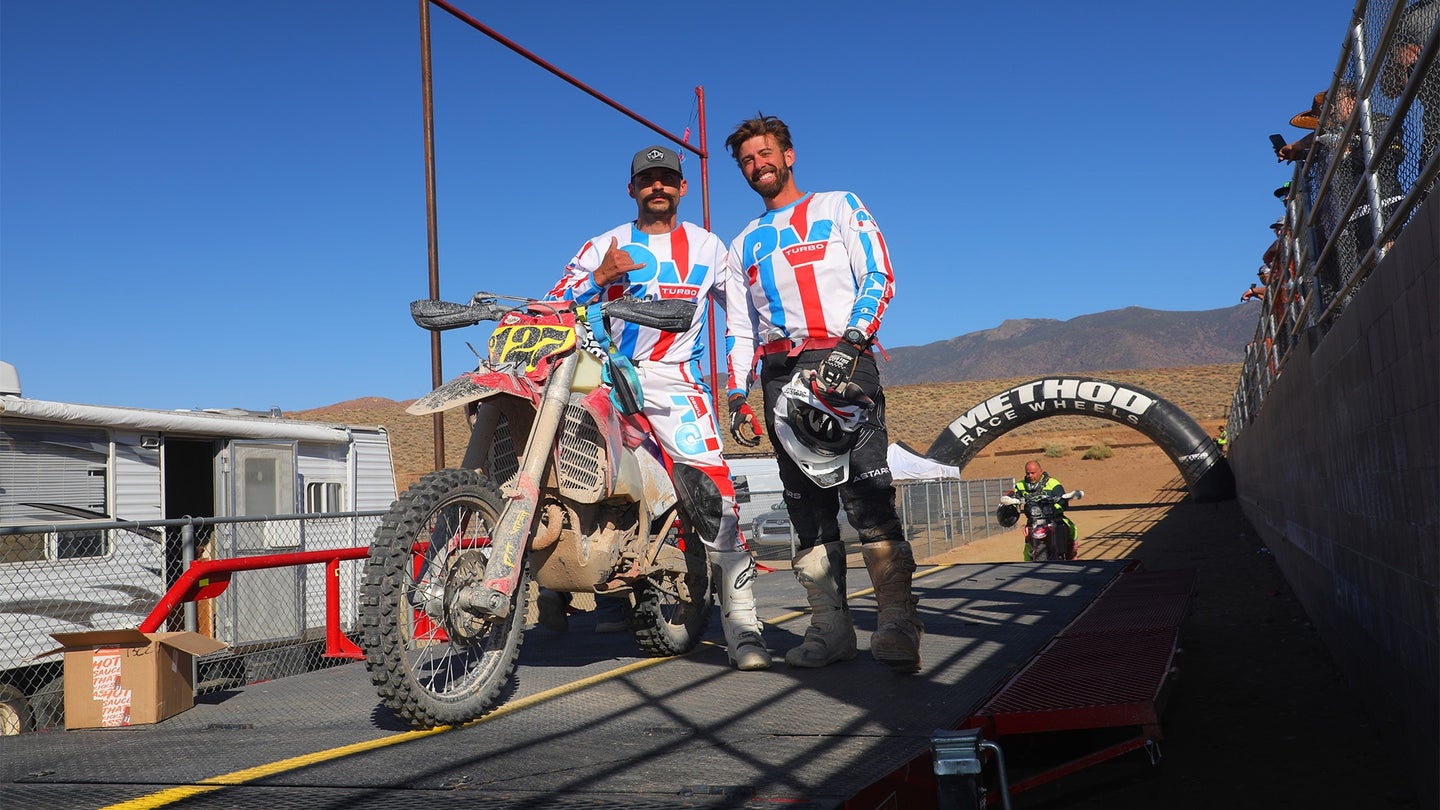 Riding through the desert at high speeds on the motorbike for 24 hours a day. All the food and fuel, aside from what you pick up at various checkpoints, you carry with you. How you cover the distance is up to you, as it’s almost entirely off-road — just try not to get lost along the way.

That’s the gist of a rally race, and when it comes to motorized treks across unrelenting terrain, the Dakar Rally seems like an impossible task: crossing almost 5,000 kilometers through the Arabian Peninsula over the course of two weeks.

For Seth Barnes and a few other Marine Corps veteran riders, it’s a challenge they plan to face head-on.

Barnes, 31, is a former Marine EOD tech, so he isn’t a stranger to gnarly situations. He deployed to Afghanistan and helped clear unexploded ordnance from the island of Peleliu in Palau, where the 1st Marine Division suffered almost 7,000 casualties seizing the island in 1944. He was always riding motorcycles, but never professionally, racing at the amateur level in his home state of Ohio

Along with a team of fellow Marines, Barnes plans on spending the next year riding dirt bikes in some of the toughest rally races in North America. It’s all in preparation to send at least two of his fellow Marines to compete in the most challenging race in the world, the Dakar Rally.

“Dakar is literally the pinnacle of racing, but we’re setting the warpath to get there,” said Brent Phillips, another one of the riders.

“During my time in the Marine Corps I tried to keep riding as much as I could, in Hawaii and Camp Pendleton,” said Barnes. “When I found out that Brent was a rider, I thought it would be cool to get some veterans and do this endurance race in 2022, but it turned into something bigger.”

Phillips is a former Marine raider. In 2015, he founded SOFLETE, a fitness program that, according to its website, builds “durable tactical athletes” through a unique fitness and nutrition regimen.

Before founding SOFLETE, Phillips rode dirt bikes as a child but didn’t get into competitive racing until leaving the Marines. He had been competing in off-road races since 2018, and earlier this year had the chance to compete in the Vegas to Reno Race with another Marine veteran, Josh Rottkamp.

Vegas to Reno is billed as the “longest off road race in the United States.” It’s around 550 miles of racing across some of Nevada’s harshest terrain, completed in one full day.  It was Rottkamp’s first time racing something like Vegas to Reno, but that didn’t hold him back.

“Josh has a screw loose,” said Phillips in a video documenting their race. “So I’m kind of terrified that he’ll ride a little too hard. It’s also his first ever race, which is absurd.

Phillips and Rottkamp finished in 3rd place in the open amateur division, and from there the idea for a team of rally racing Marine veterans was born.

All of the Marines on the team — four riders and one mechanic — have experience riding bikes. They grew up riding them or working on them with family or friends, but none of them are professionals. And while the Dakar Rally can cover up to 3,000 miles of terrain – this year’s race crosses all of Saudi Arabia – this team has something on their side.

“None of the guys are actually professional racers and their greatest self-proclaimed strength is ‘an ability to suffer that was beat into us during our time in the Marines mopping floors,’” the team said in a press release.

“The joke with us is why sponsor people who aren’t pros?” added Phillips. “But giant desert races are just suffering, and suffering is a Marine’s life.”

Rottkamp, 30, grew up in northeastern Pennsylvania, starting riding with his father and brother when he was around 8 years old. He enlisted after graduating high school and first served in a mortar platoon in the 1st Battalion, 8th Marine Regiment, deploying to Afghanistan.

After his discharge, Rottkamp was involved in a bike accident that resulted in his right leg being amputated below the knee. “In typical Marine grunt fashion as soon as the doctors cleared me to walk I was back on the bike the next day,” he said.  He now lives in Utah and works in a motorsports company.

The mechanic for the team is Ray Rodden, who is still finishing up his active duty service in the Marines. He enlisted in 2011 as a radar technician before reclassing to EOD, where he first met Barnes. (Another rider, Jake Blick, is also a former recon Marine.)

The Dakar Rally is the pinnacle of off road racing. Started in 1978 as a race from Paris, France to Dakar, Senegal, 184 racers competed in the initial event, and it’s only grown in size since then, including classes in vehicles, motorbikes and ATVs. In 2008, threats from the terrorist group al-Qaeda prompted moving the course to South America, and the location was again switched in 2020 to Saudi Arabia. But the premise is the same regardless of the venue: Thousands of miles over some of the ruggedest terrain on the planet.

Riding in these races is tough work.  Something like the Sonora Rally, a race across Mexico’s Sonora Desert, is “just trying to follow a compass on a map, it’s old school and raw, just surviving in the desert,” said Barnes.

Before every race, every rider needs to be trained and every bike prepped.

“The bike is about 225 pounds just ripping through you, said Barnes, “So a lot of it is just training to be on the bike for a long time.”

Preparing starts with just getting used to being on a bike for the amount of time that the individual segments in these races last, training to ride and navigate over open terrain. Races like Dakar don’t happen over open roads; they’re run through whatever path is available. That means spending hours a day riding the bikes. Just getting used to spending hours at a time in such punishing conditions is essential preparation for for the race.

This team of Marines is spread out around the country, but the training is the same – riding bikes for hours at a time and practicing “sprinting” – riding at high speed – on their rides.

Phillips compared it to training for a long-distance bicycle race.

“It’s an ultra-endurance event,” he said. “And if you go off the track, the consequences are catastrophic.”

Just as important, though, is the bond between the team. It’s a group of Marines, all of whom share a shared interest in racing, getting together and spending time with one another.

“It’s absolutely epic,” said Phillips. “Like a bond with someone because of a shared task at hand. For guys who still long for that kind of camaraderie, it’s a great place to get the same feeling.

The first race the team will compete in is the Parker 250, held in Arizona. From there, six more races, culminating in the Sonoran Rally – five days of riding through the desert of Mexico’s Sonora Desert.

The ultimate goal is to get at least two of these Marines qualified for Dakar.

But for these Marines, the monumental is completely attainable.