This British sniper may have the deadliest mustache in the world

One U.S. soldier called it "immaculate." 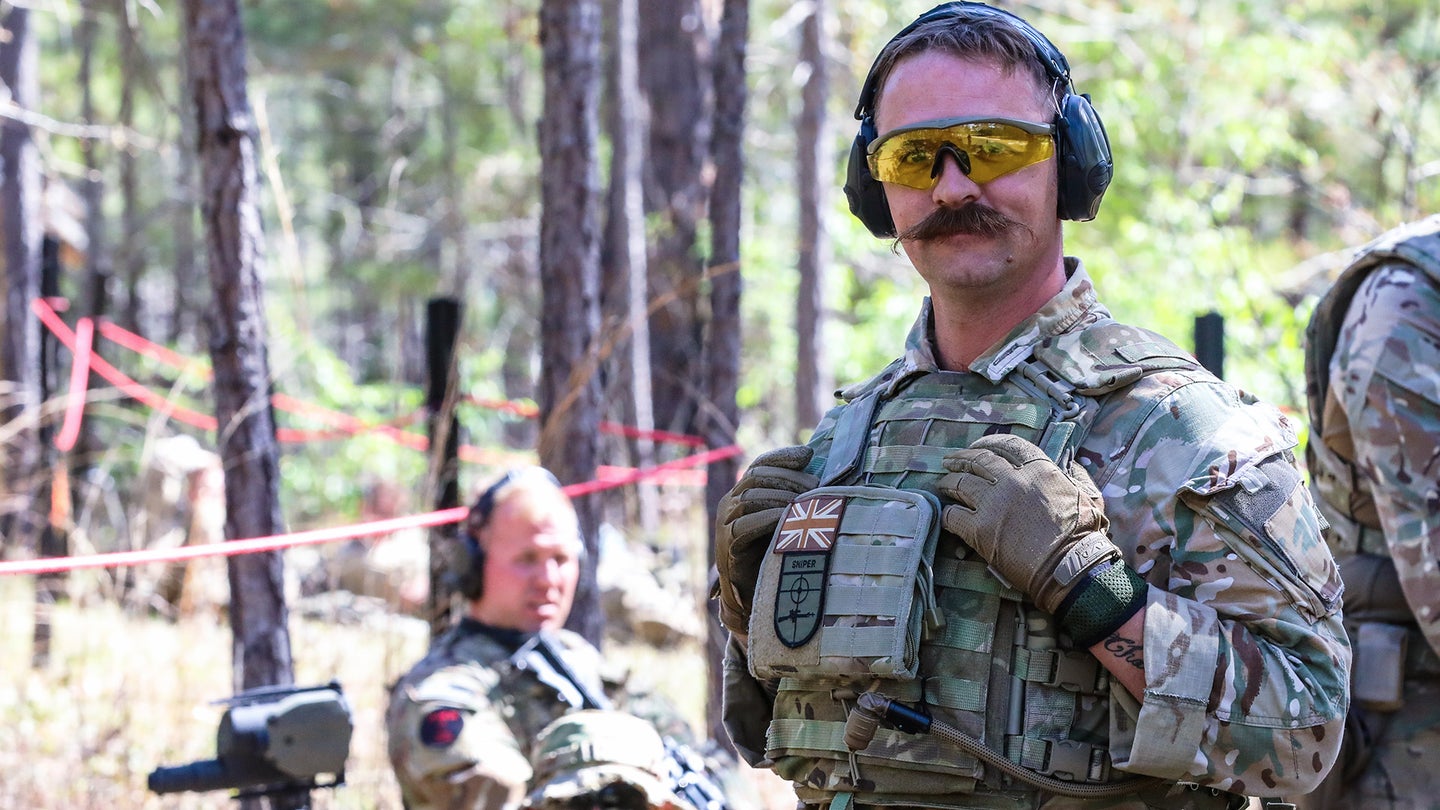 FORT BENNING, Ga. - Sniper Teams from across the globe travel to Fort Benning, Georgia to compete in the Annual International Sniper Competition, April 04, 2022, on post. The goal of this competition is to identify the best sniper team from a wide range of agencies and organizations that includes the U.S, and International Military units. (U..S. Army photo by Markeith Horace, Maneuver Center of Excellence, Fort Benning Public Affairs).
SHARE

One of the easiest ways to pick out a foreign military service member standing among American troops, aside from the obvious difference in uniform, is facial hair. Usually, U.S. troops do not have any.

That difference was put on full display during the 2022 International Sniper Competition at Fort Benning, Georgia, from April 4 to 6. At the competition, 30 teams from across the U.S. military and six international militaries competed for the title of best sniper team, pushing non-stop through various events that as a whole were meant to simulate a combat mission.

Before the competition was even over, however, one British soldier had already won a different title: Best mustache.

British Army Warrant Officer Class 2 Wesley Dale, who introduced himself as Wez, had a “sick mustache,” one U.S. competitor commented to Task & Purpose. Another American concurred, calling it “immaculate.”

“You’ll know it when you see it,” said a third.

When asked about his mustache’s fame, Dale responded matter-of-factly that it was the “most outstanding mustache in the competition.”

While U.S. service members have for years pushed the idea of allowing more facial hair in the military, which usually restricts whiskers to within the corners of the mouth, the Pentagon hasn’t budged. In the Army specifically, Sgt. Maj. of the Army Michael Grinston has made clear that while there were plenty of other changes coming to hair and grooming standards, primarily for women, allowing men to have more facial hair or beards would not be one of them.

“We’re not looking at it,” Grinston said of beards last year when the other changes were announced. “But there’s already an exception to policy for those that have issues with shaving, there’s already a profile that you can get and you can have a beard. There’s also religious accommodations … but we have not reviewed it and it’s not on the docket so right now, you will not have a beard.”

Clearly, there are no such restrictions in the British Army, which is good news for Dale, whose mustache surely struck both inspiration and fear in the hearts of his competitors at Fort Benning. In fact, for this article, when Task & Purpose approached Dale, he joked, “Are you here to talk to the mustache?”

Where Dale grew up, kids either “went to jail or you joined the military,” he told Task & Purpose last week. He opted for the military and joined his local county regiment in January 2001. Now, more than 20 years later, he’s a company sergeant major — an appointment in the British Army, not a rank — for a training and advisory team, which he said oversees “all risk to life training for any training that involves ordnance, munitions, or explosives personnel” within the division.

When he first joined the regiment in 2001, snipers were “always up there at the top with the recon guys,” he said, adding that it was “something to aspire to, something to achieve.” He said he joined his first sniper platoon after serving with a surveillance platoon in Kosovo, and in 2005 he deployed to Iraq as the second in command of a sniper platoon. He also deployed to Afghanistan as a rifle platoon sergeant in 2011, and was placed in a training and advising role for the Afghan National Army.

While Dale and his teammates, Sgt. Daniel Stanton and Cpl. Gareth Davies, didn’t take home first place among the elite teams at the competition, that didn’t stop them from learning a ton while they were there. Dale said his favorite exercise was the “Mystery Box” event on April 4, which placed Stanton and Davies inside a connex building, spotting and shooting at targets downrange which would expose a color after being hit. When that color was revealed, the two teammates had to yell the color to Dale, who was outside the connex and who would then shoot a pistol at that colored target on a Texas Star.

After hitting the correct target, he would proceed to the corresponding color’s rack and shoot each target before moving back to the starting position, then allow his two teammates to take out another target and give him the next color.

Almost everything in the event was “stuff we don’t really get to do in the U.K.,” Dale said, because of policy regulations that keep them from doing “those types of shoots at the same time.” Because of regulations, they hadn’t really been able to train for something like that event, but Dale said the shooting portion of that event was the most fun.

While they left that event incredibly confident in how they performed, Dale said their biggest flaw was their ability to shoot at night. In order to improve on that, he said they’d need to learn how to really maximize the use of night-vision capabilities still being introduced to them, and simply train more. But he said they also noticed a difference in the “level of basic maintenance” that U.S. snipers can do on their weapons compared to what they do in the U.K. Dale said they only do “very, very basic stuff in terms of user maintenance,” but the U.S. snipers maintain their weapons at a level “so far ahead of what we’re doing.”

And while the British team may not have taken home first place, Dale at least is taking home the title of best sniper mustache. “I’m not going home empty-handed,” he laughed.