How an airman fought off a grizzly bear in Alaska

"Things could have ended horrifically different." 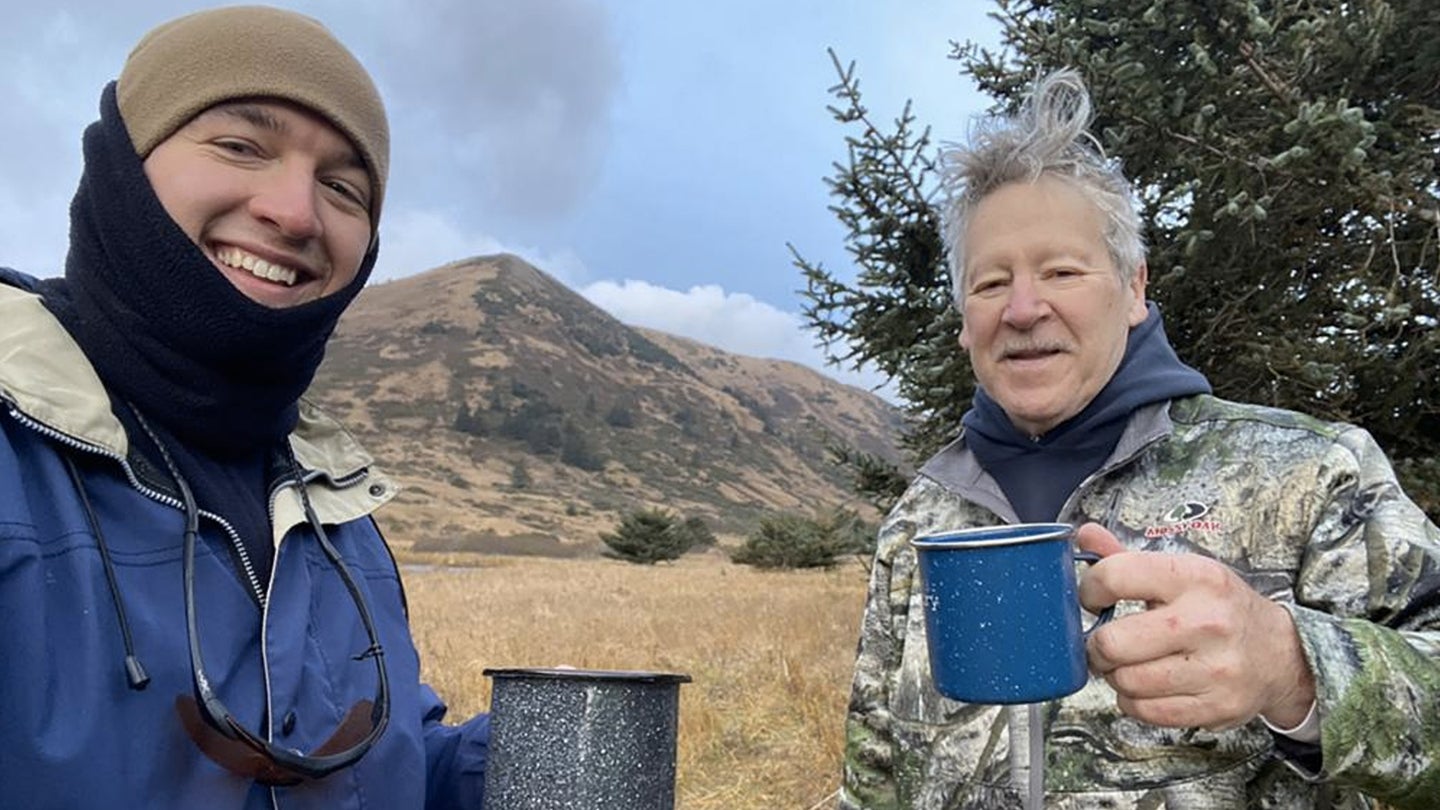 Getting pinned to the ground by a Kodiak bear is not how most people would like to spend a vacation, but that’s exactly where one airman found himself while on a hunting trip in Alaska last October. If not for his preparation, mindfulness and teamwork, all skills he attributed to his military training, Senior Airman Brady Penn and his father Steve may not have made it back alive. Luckily, the preparation paid off, and the two men survived what could have been a disastrous encounter.

“There was nowhere to run, no way to fight, my mind raced for a way out but found none,” Penn recalled in an essay about his experience that was published on Wednesday.

It wasn’t the way Penn thought things would turn out when he got a call from his father last spring. Steve had just won a hunting lottery for Alaska residents, awarding him a permit to hunt elk on Afognak Island, off the south coast of Alaska. Afognak, like the rest of the Kodiak Archipelago, boasts “some of the best hunting and fishing in North America,” Penn wrote, including salmon runs, Roosevelt elk, the largest elk in North America, and the Kodiak bear, second only to the polar bear as the largest bear in the world.

“This was a once in a lifetime opportunity, so I agreed to join him on the weeklong expedition,” the airman said.

Over the next few months, he and Steve geared up for the trip both mentally and physically. Afognak is no simple weekend getaway: it’s a windswept island cut off from the rest of the world by turbulent weather and the cold waters of the northern Pacific Ocean. The Shelikof Strait, which separates the Kodiak archipelago from mainland Alaska, “is notorious for its ferocious weather,” Penn wrote. “90 mile-per-hour winds regularly roll through the strait making emergency rescue from Afognak often impossible.”

It takes preparation to survive on your own in that kind of wilderness, and the Penns were determined to be as prepared as possible. They tested and retested their equipment, physically trained for the “grueling hikes,” practiced shooting on the range, and discussed contingency plans with more experienced hunters.

“Readiness, a skill and concept I had worked to hone in the military, was essential to our success and survival,” Penn wrote.

Finally the big day arrived, and the airman found himself “standing on a blustery dock in Kodiak, peering through the morning fog at a single engine float plane which would take us to the hunting ground,” he wrote.

The plane, a de Havilland DHC-2 Beaver, took the Penns on “a turbulent 45-minute flight and a precarious landing on a small lake,” the airman wrote. The two hunters and the pilot worked together to unload the aircraft before the pilot got back in the plane to leave.

“That hill right there is going to be your best bet” for a campsite, he said. “I’ll see you in a week unless we hear from you sooner, I can’t say I envy you out here in this weather.”

It was official now: they were on their own. The wind grew stronger as Penn and Steve settled in for the night. Freezing wind and light rain continued into the next morning, to the point where the hunters decided they had had enough waiting around.

“Well, we knew we’d have to fight the elements a bit,” Penn recalled saying as he pulled on a fourth layer. “I guess it would be better to be cold out there than cold right here.”

The cold was not the only challenge ahead of them. The father and son walked up difficult terrain covered in thorny bushes and branches intent on punishing Penn at every opportunity.

“[A] branch whipped me in the eye, blinding me and making me stumble, a potentially deadly mistake on the steep mountain face,” he wrote. “Later, another branch jabbed into my ear, a unique level of discomfort, even in a morning full of plentiful discomfort. It was clear that any exposed body part would be struck, jabbed or whipped by the brush on this journey.”

They finally made it to the saddle of a mountain ridge, and then found a game trail leading into the valley below. The hunters followed that trail, though each step led them further away from camp and deeper into thick brush that shrunk their view of their surroundings. But despite the brush, Penn suddenly spotted something about a quarter mile away, almost invisible against the browns and greens of the forest.

The hunters approached the herd as quietly as they could, but they lost track of the elk amid the alder trees and tall grasses.

“We had nearly given up when we stumbled to the top of a bluff and found ourselves nearly face-to-face with a huge bull elk, its antlers stretched out like massive branches on a tree,” Penn wrote. “The howling of the wind made my eyes water as I gauged the shot. I had only seconds before the elk would move out of sight or smell us and bolt.”

The shot shattered the silence of that remote island, followed shortly by the roughly 1,200-pound elk falling to the ground. It took an hour just for Penn and Steve to cross the valley to where the animal lay dead. It must have been an exciting 60 minutes.

“We had had great luck by managing to kill an elk on only our second day on the island, however the difficult part was about to begin with many hours of trekking to and from camp with heavy backpacks full of elk ahead,” the airman wrote.

The airmen began cutting up the meat and packing it back to camp, but they could carry only so much in one trip. The rest they put in a bright white game bag hung from a tree so that scavengers wouldn’t get to it … or so they thought. The next day, Penn and Steve learned otherwise.

“As we crested the valley and headed down toward the patch of alders where we had left the remains of the elk the afternoon before, something wasn’t quite right,” Penn wrote.

The bright white game bag was missing. Maybe it was the wind? Or perhaps a bear knocked it down?

“I guess we should be ready for anything,” Penn recalled saying.

As they drew closer to the remains of the elk that were not in the game bag, Penn put a round in the chamber of his rifle. He and his father talked loudly to make sure any wildlife nearby kept their distance. Fifty yards from the dead elk, the hunters waded into a small meadow, where Penn felt relieved to be walking comfortably in the tall grass.

“Birds chirped, the wind slowed, and I took in the natural beauty around me,” he wrote.

Then it all stopped with the “cracking of branches like firecrackers and a low growl.” A grizzly bear appeared out of the corner of Penn’s eye. Just 10 yards away, ears back, head low, charging through the trees “as if they weren’t there.” The airman didn’t even have time to fire his rifle. A paw sent him airborne and spinning before landing face down, his rifle under him.

“A paw pressed my back, the metal frame of my backpack bowed under the bear’s weight as I lay helpless in the grass,” Penn wrote.

Time seemed to slow as the airman tried to think of a way to free himself. Then suddenly the weight lifted from his back as the bear moved to attack Steve. Penn heard grunting as Steve struggled with the bear, but it disarmed him easily with a swipe and pinned Steve too. But that left Penn free to make his move.

“I struggled to my feet in the chest high grass and wheeled around, rifle raised and fired without thinking,” he wrote. “The motion was automatic and instinctual.”

The bear was hit in its rear hip. It roared before running back into the trees.

“We could hear it crashing through trees and growling in the thick tree line,” Penn said.

The airman kept his rifle trained on the brush while Steve looked for his own weapon. Penn noticed that the left side of his pants had been ripped open by the bear’s claws.

“’Does the back of my leg look alright, or is it just the adrenaline?’ I sputtered as I continued to fix my eyes on the tree line,” Penn wrote. “‘It looks like a scratch,’ my dad replied as he began to assess his own limbs for injuries. ‘I think we’re okay.’”

Steve had a few puncture wounds in his hands from the bear’s teeth, but his heavy Teflon gloves had taken the brunt of it, Penn said. The two walked back to the saddle of the mountain ridge, where they used a satellite phone to call for an early trip back. But the wind was too strong for a flight, so the earliest pick up would not be another 24 hours. With nothing else to do, the two hunters returned to their wind-battered tent to sleep.

“My mind raced all night, rationalizing each noise and focusing on returning home,” Penn wrote. “Relaxation techniques I had used in basic military training returned to me, and I was eventually able to fall into a restless sleep.”

Bear attacks in the wild are rare. Usually as long as people keep their distance and avoid surprising or feeding bears, the two creatures leave well enough alone. However, the risk of a dangerous encounter increases while hunting, particularly if a large game carcass is involved.

“Far more bear conflicts arise once you have downed a big game animal,” according to the Alaska Department of Fish and Game. “Remember, in most cases, you will be packing out your animal in multiple trips which will increase the risk of encountering a bear.”

Usually if a bear is acting defensively, as in huffing, stomping, salivating, or looking agitated, game officials advise hunters to “calm the bear — and yourself — and let the bear know you are not a threat.” However, if a bear “deliberately approaches and contacts you in a situation where the behavior does not appear defensive, aggressively fight off the bear with any means available.”

And that’s exactly what Penn and Steve did. Thankfully, it worked. The plane arrived the next day, and on the trip back the airman reflected on how his and Steve’s teamwork, preparation and calm in a difficult situation had saved their lives.

“If one piece of equipment had failed, or if we had not worked together to distract and repel the bear, things could have ended horrifically different,” Penn said. “My dad’s painstaking preparedness and our resilience in a moment of panic had played vital roles in our escape.”

Those lessons have plenty of overlap with military life, where good training is key to overcoming chaotic situations.

“My hunting expedition showed me that preparedness and wingmanship are essential in any endeavor,” Penn said. “Regardless of an airman’s career or hobbies, you never know when their good habits and practices honed through training may someday save a life.”