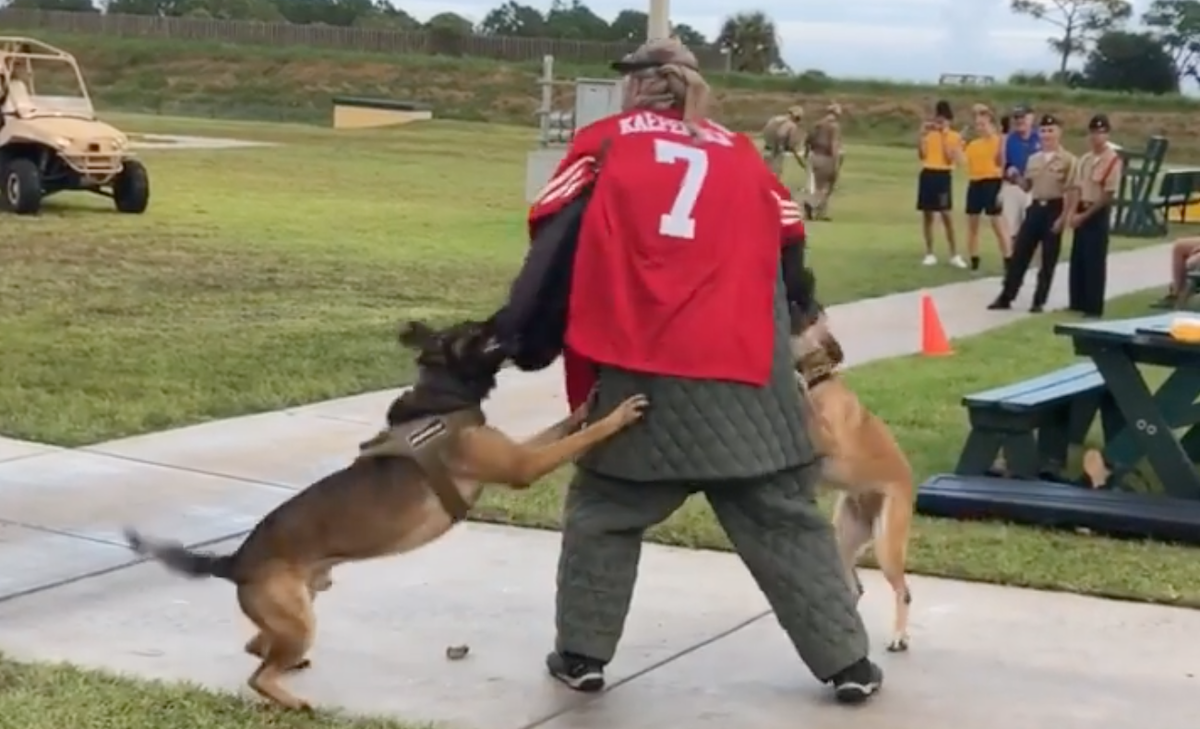 Naval Special Warfare Command is investigating a video that showed military working dogs attacking a target in a Colin Kaepernick jersey during a demonstration at the Navy SEAL Museum last year.

The video's caption reads “Colin Kaepernick stand in Josh gets attacked by 5 Navy SEAL dogs for not standing during the National Anthem at a Navy SEAL Museum fundraiser.”

Naval Special Warfare Command said in a statement on Sunday afternoon that they learned of the video on Sunday.

“The inherent message of this video is completely inconsistent with the values and ethos of Naval Special Warfare and the U.S. Navy,” the statement said. “We are investigating the matter fully, and initial indications are that there were no active duty Navy personnel or equipment involved with this independent organization's event.”

The Navy SEAL Museum, located in Fort Pierce, Florida, is a non-profit “dedicated solely to preserving the history of the U.S. Navy SEALs and their predecessors,” according to its website. The board of directors includes seven retired SEALs.

Kaepernick sparked a movement among professional athletes in 2016 by kneeling during the national anthem to protest racial injustice and policy brutality. That message has received additional attention in recent months since the death of George Floyd, an unarmed Black man, at the hands of a white Minneapolis police officer in May.

Meanwhile, the military has been facing a reckoning of its own over race and diversity within the ranks, leading to a string of new policy announcements from the Pentagon.

In July, Defense Secretary Mark Esper issued a memo “directing a three-pronged approach to take the initiative against discrimination, prejudice, and bias in all ranks of our Armed Forces.”

After reviewing recommendations across the Department, I immediately acted on issues we can address now. pic.twitter.com/sZ4au11XD7

“Diversity and inclusivity in the ranks are not merely aspirations, they are fundamental necessities to our readiness and our mission success,” Esper said. “The actions I am directing are a necessary first step, but hard work remains, and we will continue to learn as we move forward.”

Update: 6:04 p.m. EDT: This post has been updated to include that the Navy SEAL Museum is a non-profit organization.

Update: 8:08 p.m EDT: This post has been updated to remove “SEAL” from the headline, as the Navy is still investigating if the dogs are SEAL military working dogs.