These Drunk Soldiers Slapped A Fake Navy SEAL, And We Get The Stolen Valor Video We Deserve

Stolen valor videos are an interesting bit of cultural nuance — an often emotional collision between two poles of the... 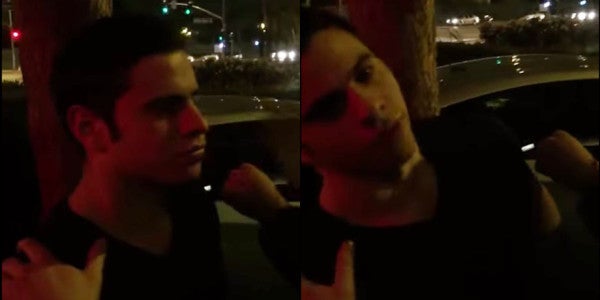 Stolen valor videos are an interesting bit of cultural nuance — an often emotional collision between two poles of the millennial generation. It pits those who volunteered to serve in the post-9/11 military — the smallest percentage of war veterans of any generation in American history — against those who, for various vexing reasons, want the accolades for having served with none of the work. By this measure, it's a confrontation between the best of a generation and the worst of it.

This, coupled with a technological era where everyone has a video camera at their fingertips, and the ability to instantly reach masses of people almost instantly on the Web, has resulted in dozens of videos of U.S. service members and veterans confronting uniformed phonies at video game stores, in malls, on college campuses, even at funerals.

It feels like a new stolen valor video goes viral every month. Some dude decided to put on cammies to try to get 10% off at the mall and it’s literally a national news story. We love these videos as veterans, as Americans, as consumers of digital media because we love the troops right, and freedom, and baseball, and authenticity. We hate it when people get exposed lying about standing for those things, and we love it when they get exposed.

But there's often something dissatisfying about these videos. The emotions of the real-deal servicemen doing the confronting are often high; they don't ask the right questions, they occasionally yell. Sometimes, even, the phony escapes the situation without having reality and justice pinned to his chest in place of those disarranged medals.

“You know what he should have asked him,” we say as we watch the videos on our laptops or smartphones, and then we cite some inescapable bit of trivia or culture that would have stopped the faker dead in his lie.

Or maybe we silently wish that the real warrior would have just slapped the fake one across the face; that would have shown him.

Well, finally ,thanks to a group of drunk purported Army Rangers, we get the stolen valor video we deserve. The video, facilitated by drunkenness and a prolonged wait for an Uber taxi, provides both tough questions and a slap to the face.

Admittedly, there was a bit of debate in the Task & Purpose newsroom about the newsworthiness of this clip. A certain editor, who shall remain unidentified, but whose title rhymes with schmanaging editor, dismissed the video as “a dumb bar fight,” citing details like “they’re all hammered,” and appealed to this editor with compelling arguments like “really please don’t.”

While everyone in this video does come across like a bit of a drunk asshole, I think there’s some value worth exploring here.

The video, which surfaced online recently, shows a handful of soldiers or Army veterans, it’s not clear, in a confrontation with a man outside of a bar. The man claims to be a Navy SEAL, and uses the claim to inform the men that they don’t want to mess with him.

The man’s drunkenness initially seems to give him a sort of confidence that we don’t often see from stories of stolen valor.

The soldiers immediately ask him about his area of operations when he was deployed, and he replies by simply saying, “Shhhh…”

But by the next question, this impression of a Navy SEAL comes apart. “Do you have a trident?” he’s asked.

“There’s no trident in SEALs,” the man replies.

Bad guess. The SEAL trident is the insignia awarded to Navy SEALs upon completion of BUD/S, the Navy’s Basic Underwater Demolition/SEAL training.

It only gets worse. Next question: “What team were you on?”

This should be easy. Just spit out a number one through ten exempting nine. Everyone knows about SEAL Team Six, the guys who killed Osama bin Laden and those Somali pirates who abducted Tom Hanks in that movie. You’re in this deep, why not go all the way and say you were a Team Six guy?

This man’s answer? Artillery. He says he was on the Navy SEAL artillery team. It was a monstrous fail even by the super low bar set by stolen valor standards. Remember the chubby guy who claimed he was shopping at the mall with his sergeant major? This is worse than that.

He also answers questions about where he served in Afghanistan by saying, “You guys wouldn’t know the area of Afghanistan.”

The men take a few moments to competitively mock SEALs and their “acting skills” in a way you may expect from Army Rangers, then proceed to physically confront the Robert O’Neill wanna-be.

“Brother, dude, get the fuck out of here,” one of the men says before slapping the fake SEAL across the face and pushing him away, “and stop pretending to be a Navy SEAL.”

The men push the fake SEAL away, and encourage him to leave. He’s too drunk to recognize that as his best option, and after another slap and an ensuing physical confrontation winds up on the ground.

During the confrontation, one of the men in the video can be heard saying, “We’re Army Rangers, we actually served with Navy SEALs in fucking Afghanistan. I fucking saw Navy SEALs get shot in the fucking face, so get the fuck out of here.”

It takes the drunk fake Navy SEAL being put to the ground, ignoring suggestions that he walks away, before he puts both hands up in an act of surrender and says, “I’m walking away.”

In five minutes, he goes from claiming to be a badass war hero — the trident-less star of the Navy SEAL artillery team — to a meek drunk millenial on the ground afraid he’s going to be punched.

Is this what we’ve wanted to see? It’s a natural escalation of the stolen valor infatuation and outrage that knows no rules of engagement. The sentiment seems to be: These phonies are the enemy, let’s get ‘em. Brian Williams; Bill O’Reilly [Ed. note — to be determined]; Hell, the secretary of veterans affairs. Motivations don’t matter, circumstances don’t matter, we just take out our pitchforks and laugh at the loser telling fake war stories over and over and over again.

What’s the point? Where does it end? What does it achieve?

This last video was uploaded to LiveLeak with the title “Navy SEAL Poser gets BITCH Slapped by Real Army Ranger,” and has garnered well over 100,000 views. Patriotism and justice presented in streaming video, with the sort of headline we’re used to seeing attached to videos on TMZ.

People have been talking shit and getting in fights outside of bars since before bars existed, but introduce the claim of being a veteran into it and it becomes a viral video, more than a bar fight and a drunken encounter, it’s a national outrage.

Anyway, here’s the video you’ve probably been dying to see, and deserve to watch: