A Navy officer and a Marine fired their sidearms in an attempt to kill or stop Muhammad Abdulazeez, the gunman... 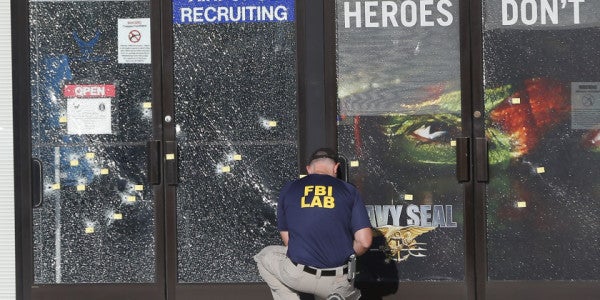 A Navy officer and a Marine fired their sidearms in an attempt to kill or stop Muhammad Abdulazeez, the gunman who killed four Marines and fatally wounded a Navy sailor in Chattanooga, according to military officials briefed on the internal reporting of the shooting.

Navy Times’ David Larter reports that it is still unclear whether or not the two men hit the shooter. It is also unclear why they were armed since it is against Department of Defense policy for non law-enforcement personnel to carry firearms on a military facility.

A report distributed to Navy leaders in the aftermath of the shooting indicates that Navy Lt. Cmdr. Timothy White used his personal firearm to engage Abdulazeez. Navy Times confirmed a Washington Post report that one of the Marines killed may have been carrying a 9mm Glock, and might have returned fire on the gunman.

The shootings started the morning of July 16 when Abdulazeez opened fire on a recruiting station before driving to the Navy support center. Abdulazeez was shot and killed in a gunfight with law enforcement.