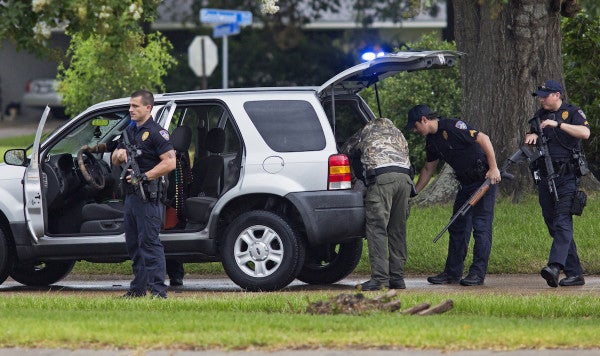 The gunman suspected of killing three Baton Rouge law enforcement officers Sunday morning and wounding three other others has been identified as Gavin Eugene Long of Kansas City.

Police said Long apparently died in a shootout with police on his 29th birthday.

A Star reporter on Sunday afternoon knocked on the door of a Kansas City home once listed as a residence for Gavin Long. The reporter was met at the door by a man with a long gun who declined to comment.

Long left the Marines in 2010 with an honorable discharge, according to CBS News, which cited an unnamed military source. His rank was E-5 (sergeant).

A Gavin Long graduated in 2005 from Grandview High School, according to The Star’s library. A Gavin Eugene Long of Kansas City was on the dean’s list of the University of Alabama in 2012, according to the university’s website.

According to archives, The Star published a marriage announcement for Aireyona Osha Hill and Gavin Eugene Long on July 22, 2009.

Court records show that Long filed for divorce from his wife in 2011. Records suggest the couple did not have children.

No one was at the home where his ex-wife last lived. Neighbors said the couple had moved out some time ago but occasionally visited the three-story brown-colored house.

A phone number listed for the domain convoswithcosmo.club was also used in websites where Long apparently used the identity of Cosmo Setepenra. No person with the name Cosmo Setepenra appeared to be otherwise listed in Kansas City or elsewhere.

As Cosmos, a self-proclaimed “freedom strategist, mental game coach, nutritionist, author and spiritual advisor,” Long shared his perspective frequently on platforms such as Instagram, Twitter, YouTube and a personal website that touted the “Convos with Cosmo.”

On his website, “Convos with Cosmos,” he wrote blog posts about sex, health and entertainment and appeared to sell holistic health coaching sessions. In recent weeks, he had shared commentary about high-profile officer involved shootings, including Alton Sterling, who was shot by police outside a Baton Rouge gas station earlier this month.

He told a YouTube audience that he traveled to Dallas before the police shooting and was in the city during a sniper attack that killed five officers.

He encouraged “real” and “alpha” individuals who wanted change to take a different tactic in invoking change.

Authorities initially believed that two other assailants might be at large, but hours later said the dead gunman was the only person who fired at the officers.

The local FBI office is assisting with the investigation stemming from the shooting earlier Sunday. However, details of their investigation were not released, said Bridget Patton, spokeswoman for the FBI in Kansas City.