During a campaign rally in Ashland, Virginia, Republican presidential nominee Donald Trump took something out of his pocket and shared... 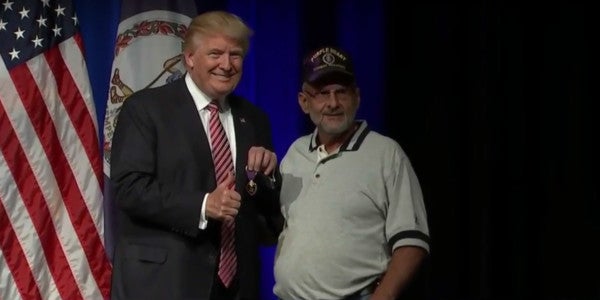 During a campaign rally in Ashland, Virginia, Republican presidential nominee Donald Trump took something out of his pocket and shared it with the crowd.

It was a Purple Heart medal. The decoration awarded to U.S. service members who are killed or wounded in the direct actions against the enemy, it is one of the most heralded medals in the armed forces.

“You know something very nice just happened to me,” Trump said. “A man came up to me and handed me his Purple Heart.”

Trump said he asked the man if the medal was real, or if it was a duplicate. Trump said the man said, “That’s my real Purple Heart, I have such confidence in you.”

“Man,” Trump said, “That’s like big stuff. I always wanted to get the Purple Heart. This was much easier.”

He then invited the man, who he identified as a retired lieutenant colonel, up on the stage. He emerged to raucous applause, wearing a Purple Heart recipient hat and walking with a cane, and shook Trump’s hand.

The exchange comes as Trump is being widely criticized for his interactions with the military community, largely over his rhetoric with the Khan family. Khizr and Ghazala Khan, parents of Army Capt. Humayun Khan, who was killed in action in Iraq, appeared at the Democratic National Convention in Philadelphia on July 28. Trump later said Khizr Khan had no right to criticize him and questioned whether Ghazala Khan was allowed to speak.

Yesterday, the New York Times published an article delving into Trump’s life during the Vietnam War, where he received four draft deferments for college and then a medical deferment for having bone spurs in his feet.

Watch Trump receive a Purple Heart medal in the clip below: