On Saturday afternoon, President Donald Trump took to Twitter to let the country know how excited he was to be... 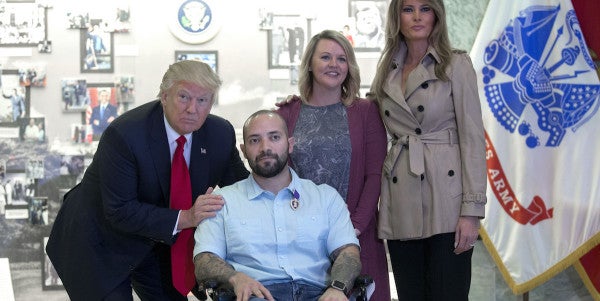 On Saturday afternoon, President Donald Trump took to Twitter to let the country know how excited he was to be heading to Walter Reed Medical Center to meet with wounded warriors.

Getting ready to visit Walter Reed Medical Center with Melania. Looking forward to seeing our bravest and greatest Americans!

When he arrived, Trump held a brief ceremony to award a Purple Heart medal to Army Sgt. 1st Class Alvaro Barrientos, who was wounded in Afghanistan on March 17.

“When I heard about this … I wanted to do it myself,” Trump said during the ceremony. “Congratulations on behalf of Melania and myself and the entire nation. Tremendous.”

There’s nothing congratulatory about receiving a Purple Heart. No service member signs up for the military hoping to get a leg blown off, or a bullet lodged inside them. No service member is banking on ending up paralyzed for the rest of their life, or left with chronic pain that they have to cope with on a daily basis.

Sgt. 1st Class Alvaro Barrientos doesn’t think he’s won something. But, when he signed up for the Army, he knew it was a possibility that he could be injured, or even killed, and he did it anyway. Every service member knows the risk and they choose to put themselves in harm’s way regardless.

Trump still doesn’t seem to get that.

This isn’t the first time he has treated the Purple Heart like some kind of prize you get at the bottom of a cereal box. In August 2016, after retired Lt. Col. Louis Dorfman handed him his own Purple Heart, Trump said, “I always wanted to get the Purple Heart. This was much easier.”

Trump doesn’t seem to understand that no one wants a Purple Heart, because you don’t earn it without giving something up in return. As Elana Duffy wrote last year, “I didn’t want the award because I knew it meant at least a piece of me would be left behind. We didn’t get the award; we each traded something for it. We traded our brains, our limbs, and many times our lives for that piece of metal.”

Until Trump acquires some awareness of what military service actually entails, he should just smile and nod and stick to these five words, “Thank you for your service.” Once he masters those, then he can move onto more complex phrases like, “You have inspired the future generation with your courage and sacrifice.”

But, for now, he needs to keep it simple before he ends up chest-bumping a combat veteran for “winning” the Medal of Honor.