Should It Be Illegal To Buy And Sell Purple Hearts? One Congressman Thinks So 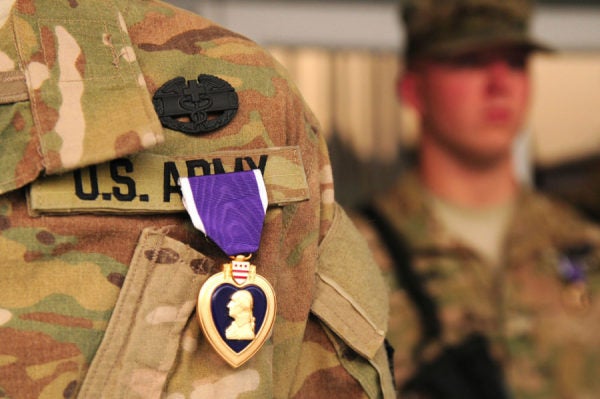 Military medal peddling is a lucrative market. With pawn shops, resale sites, and memorabilia stores offering Purple Hearts for cash, military enthusiasts have been able to add precious medals, earned by those who sacrificed blood, sweat, and sometimes their lives, to their private collections.

“A lot of people don’t understand why people collect these. They think it’s a glorification of war. It’s the exact opposite: It’s the celebration of America’s good deeds,” Scott Kraska, operator of a site called BayStateMilitaria.com told NBC in 2012.

The award, which is given to soldiers who are wounded or killed in action, is the longest running military medal, having originally been designated by George Washington as the Badge of Military Merit in 1782.

Now, online retailers price the medals at several hundred dollars each, but will charge more if they can prove who was the original recipient.

But a California congressman wants to see that practice come to an end. Republican Rep. Paul Cook, who served 26 years in the Marine Corps before joining Congress, introduced a bill at the end of September that would make selling Purple Hearts punishable by fine and up to six months in prison.

“These military collectors cheapen the Purple Heart by buying and selling this symbol of sacrifice like a pack of baseball cards,” Cook told Military Times.

The bill is named for Pvt. Corrado Piccoli, a World War II infantryman killed in action in 1944, whose Purple Heart was found an antique store in 2009. Its discovery led to the foundation of Purple Hearts Reunited, a nonprofit that returns Purple Hearts to the families of veterans who earned them.

“I’m committed to defending our veterans and that means preserving their symbols of honor like the Purple Heart,” Cook said. “These medals belong with families or in museums, not on some collector’s auction block.”

Currently, only the Medal of Honor is exempt from resale. Under the Uniform Code of Military Justice, anyone caught buying or selling a Medal of Honor can face fines and up a year in prison. Under federal law, anyone outside the military caught doing so can be slapped with fines of up to $100,000 and a year in jail. However, after the Stolen Valor Act of 2005 was struck down, it is no longer illegal to purchase all other military medals.

While a number of these Purple Hearts on the market have been given away by family members who inherited them, some soldiers desperately in need of cash actually pawn the medals.

Cook's legislation, which would put the Purple Heart in a new protected category away from con artists and memorabilia collectors alike, would not allow exceptions for veterans who wish to sell their own medals, or for family members who want to sell the Purple Heart of a deceased relative. However, Cook’s staff told Military times that the bill is aimed primarily at reseller and collectors, not veterans.