When Smuckers, a Golden Labrador mix, was frantically digging in her owners’ backyard, she inadvertently turned one of the most... 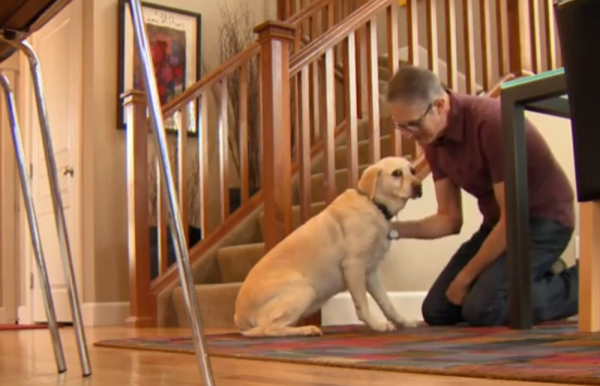 When Smuckers, a Golden Labrador mix, was frantically digging in her owners’ backyard, she inadvertently turned one of the most irritating dog habits into something meaningful, by finding a Purple Heart in the dirt. Not knowing what to do with the award, Smuckers’ owners, Tom Unterwagner and Steve Jankousky, held on to it for a decade until they discovered the Vermont-based nonprofit, Purple Hearts Reunited.

On March 22, Smuckers, Unterwagner and Jankousky were visited at their home in Stapleton, Colorado, by Army Capt. Zachariah Fike, a veteran of the war in Afghanistan and founder of Purple Hearts Reunited. According to a 9 News report, the group receives three to five military medals in the mail each week, and tries to return them to their owners, or the families of the service members who earned them.

A USA Today video shows how this one dog’s obstinate digging led to a Purple Heart finding its way to the final resting place of the man who earned it during the Korean war, Richmond Litman, who is buried next to his wife Ida, at Fort Logan Cemetery, in Denver, Colorado.