Why Service Members Are True Professionals

In the modern world, there are jobs and there are professions. There’s no concrete or universally agreed-upon line between the... 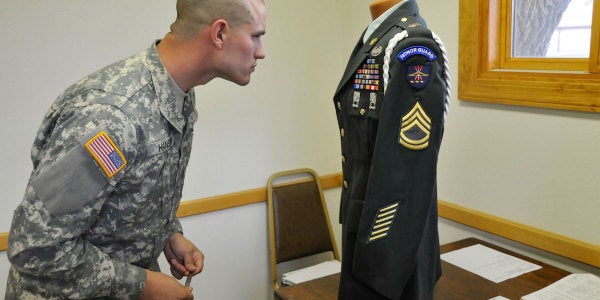 In the modern world, there are jobs and there are professions. There’s no concrete or universally agreed-upon line between the two. Many people would classify jobs that require advanced education or degrees as “professional” jobs. Others take an even more limited definition, only including those jobs with professional associations or guilds, such as doctors, lawyers, or architects as “professionals.” The formal definition, per many dictionaries, highlights two key components. First, one must conform to technical and ethical standards of that profession. Second, one displays a businesslike manner in one’s workplace.

It’s easy to give examples of jobs that aren’t professions. The guy flipping burgers at McDonald’s is not a member of a profession, no matter how good he makes his patties. The guy digging a ditch isn’t a member of a profession, no matter how hard he works or how beautifully square the edges of his trench are. Lest I look down on manual labor, the vast majority of individuals toiling away in office buildings are not professionals, either. For example, a sales rep doesn’t necessarily follow uniform technical standards or a code of ethics to earn that title. It’s just a job, albeit one that gets less dirty.

A professional, unlike someone who “just works here,” adheres to technical and ethical standards. Asked to name a professional, many people would use a doctor as an example. A doctor has exacting technical standards to follow. Doctors are required to pass rigorous training programs lasting several years and are required to pass countless examinations. Just as importantly, a doctor has a detailed list of ethical standards to follow, most famously those contained in the Hippocratic Oath — that thing that starts with, “First, do no harm.”

That’s all great, but what does that have to do with the military? Quite a bit, actually.

Few positions in the military require specialized or advanced degrees. Still, service members have a long and rigorous lists of technical standards that they must adhere to. Each specialty has additional standards one must pass before he or she can claim that title, be that infantryman, pilot, or data analyst. Ditch diggers or burger flippers have no such organizational standard to ensure that everyone performing their job meets a given standard of expertise.

Also like a doctor, every service member has codes of conduct and ethics that they must follow to be considered part of the profession. Most jobs don’t have that. Any job that is truly a profession does.

Finally, though not part of the formal definition, one’s attitude helps define a profession. A person can stock shelves anywhere, but the military is something one has to seek out. You can hear it in the answers of people when they’re asked to say why they chose the military. They often refer to it as a calling. No one thinks of ditch digging, burger flipping, or shelf stocking as a calling. They’re just means of getting enough money to live on.

There’s nothing wrong with that, but members of true professions have something more important than just a paycheck that gets them up in the morning. They have a sense of duty and of being part of something larger than themselves.

Professionalism defines good public service. The United States has a professional military for a reason. We want those individuals who do violence on behalf of national goals to be true professionals with both high technical standards and a code of ethics. If they are just technical experts without a code of ethics, they would be mercenaries. With only a code but without technical proficiency, they would be just a bunch of yahoos running around with guns. Neither of those entities are capable of defending a nation.

Professionals take their standards seriously. They ensure that their knowledge of their specialties are comprehensive and that their skills are sharp. They ensure that they are physically fit to carry out their duties. They treat wearing a uniform like the honor it is. They continually strive to become better at their field, because learning never ends for a real professional.