When Gen. Dwight D. Eisenhower issued a letter to his troops just before the D-Day landings in Normandy in 1944,... 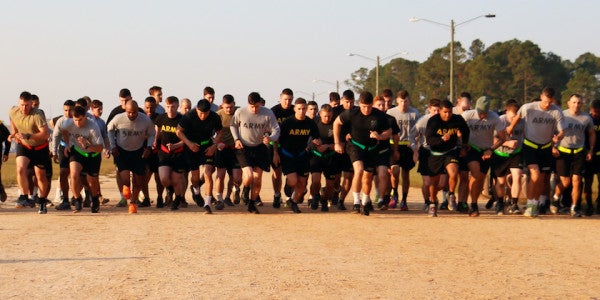 When Gen. Dwight D. Eisenhower issued a letter to his troops just before the D-Day landings in Normandy in 1944, he told them, “I have full confidence in your courage, devotion to duty and skill in battle.” He was writing to American troops who had to meet these minimum physical requirements: seven pull-ups, 31 jump squats, 27 push-ups, 52 sit-ups, and a 300-yard sprint in 52.5 seconds. Soldiers — all of them — had to be fit in 1944.

Compare those to contemporary requirements in the U.S. Army, where young male recruits now face a test requiring a minimum of 35 push-ups, 47 sit-ups, and a two-mile run time of 16:36.

In some ways, a shift has already begun, and there has been a reduction in overall fitness requirements. The U.S. military has modernized and transitioned to more mechanization and automation. While the wars in Iraq and Afghanistan have exhibited a continued need for intensive counterinsurgent ground combat, only about 20% of American military personnel have jobs that require a combat role — and thus, “combat fitness.” Such battlefields require “less sweat, more sit.”

Senior leadership is beginning to recognize this.

Secretary of Defense Ash Carter has been leading the charge to adapt the U.S. military to this new, less industrial warfare. In a 2015 speech, he addressed the heart of the problem: “Fewer young Americans are capable of serving in the military. Of the 21 million Americans aged 17–21, we estimate that only about half are able to meet our high-quality standards on our entry exam.”

Related: This One Small Change Makes It So Much Easier To Stick To Your Fitness Routine »

Factor in physical fitness and character standards, Carter continued, and “only about a third are actually eligible to join the military.” It is promising that Carter is considering the easing of standards (including fitness) for certain high-tech military positions to contend with newly evolving forms of warfare.

This is hardly just an American problem. The Israeli military has begun adapting its force structure to accommodate and integrate some of its citizens with mental and physical disabilities into specialized military jobs. If Israel, a country on permanent alert, has made these changes, they are worth seriously considering here.

Still, many argue that standardized military physical fitness requirements in each service are a prerequisite tradition, and that all should be fit enough for ground combat. Some even contend that physical fitness standards are necessary to control ballooning healthcare costs over the long term, to which a recent report says $50 billion of the annual DoD budget goes.

The problem with such arguments is that they ignore the transition away from industrial-age forms of warfare. Today, most enemies avoid direct combat and are not intimidated by how “professional” a soldier looks in uniform.

Similarly, an emphasis on standardized military fitness standards to save on healthcare costs undermines long-term national security by limiting the talent pool of military personnel recruited and retained — a pool that usually excels in highly technical jobs that merely require the physical capability of sitting in an office chair for extended periods. Indeed, there is something perversely wrong with the fitness regimen when an Air Force colonel (and KC-135 pilot) is relieved of his wing commander job just because his waist is greater than 39 inches.

American adversaries are increasingly engaging in hybrid forms of warfare that blend unconventional, irregular, and information/cyber warfare. Provocative military operations by the Chinese in the South China Sea and Russia in Ukraine illuminate this new era of perplexing low-intensity conflict. This shift means the U.S. military needs the right mix of brawn and brains, while also highlighting that raw military power no longer wins (or deters) by itself in the 21st century.

A troubling 2016 report from the Government Accountability Office identified the serious threat cyber-attacks posed to the U.S. government, including the DoD. The GAO report noted that in 2006, there were 5,503 attacks, but by 2015 there had been 77,183 attacks. This is nearly a 1,300% increase in just a decade. Continued adherence to present fitness standards in all military branches is not going to prevent future attacks.

A burly Marine may repel the Taliban in Afghanistan or an elite Special Forces unit may engage Islamic State fighters in urban warfare, but these are just peripheral threats. The real existential threat to the United States comes not from terrorists, but instead from an “Army of Cyber Proxies” that steal trade secrets and classified documents, and can cause severe infrastructural, industrial, and economic damage. The Office of Personnel Management breach of over 20 million government personnel records by suspected Chinese hackers illustrates the true danger and consequences of not recruiting and developing the right cadre of mentally rather than physically fit cyber warriors to maintain American dominance. Even recent Russian meddling in the American election process underscores the danger of this subversive warfare to democratic political institutions.

It may sound sacrilegious to suggest that the military should drop another tradition and lower fitness standards. But not doing so puts the United States at greater risk. Fitness standards for ground combat intensive jobs should remain high, but throughout the services, physical standards should be revised to match the fitness requirements of each job specialty. If even Israel can ignore fitness requirements in lieu of finding the right people to fill non-combat jobs, then the U.S. military can easily do the same. The military should adopt appropriate weight and fitness standards for citizens that want to serve in positions that enable American superiority in air, sea, space and cyber domains, as well as on the ground.