I worked at an internment camp once. It was near Baghdad, on a small U.S. military base called Camp Cropper.... 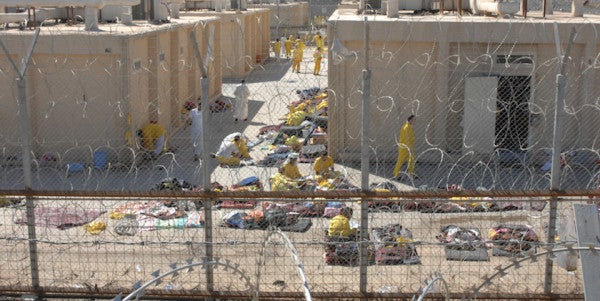 I worked at an internment camp once. It was near Baghdad, on a small U.S. military base called Camp Cropper. As an enlisted Army medic, I spent most of that 15-month deployment sitting in an air-conditioned office, waiting for the phone to ring. The inmates were kept in chain-link enclosures outside. I’d usually get called out to treat an upset stomach or a headache. Less common, but not infrequent, were seizures, diabetic emergencies, and injuries sustained in fistfights. I kept my aid bag well-stocked with ammonia capsules, in case of fakers. Inmates often feigned unconsciousness in the hope of getting taken to the hospital, which was Club Med compared to the prison. When this happened, I’d plug a capsule into the inmate’s nose and hold his mouth shut. The only time this didn’t work, the guy was dead.

The prison was encircled by razor-wire and sectioned off into several blocks. There was a block for Sunnis and another for Shiites. A more heavily fortified compound was reserved for “high-risk” detainees, like “Scuba Steve,” a detainee who once tried to escape the camp by hiding inside the base of a Porta-John.

Next door was an enclosure where hundreds of juveniles were held. They were a mischievous bunch. For a period, they made a game of luring medics out to their compound with complaints of scrotal pain. This was a ploy to get us to look at their perfectly healthy, pre-pubescent genitals. They’d cackle like hyenas.

Then, one time, a kid pulled down his shorts to reveal that he’d clawed most of the skin off his penis with his fingernails. He said he wanted to die. There was nothing in my aid bag for that. I left him with a spool of gauze and some Neosporin.

I’ve been thinking about Cropper a lot in recent days, since photographs surfaced in the news of immigrant children being held in temporary internment camps along the U.S.-Mexico border. The chain-link cages, the paper-thin sleeping mats, the foil blankets — I’ve seen it all before. But the similarities go far beyond what the pictures can show.

The Trump administration’s approach to combating illegal immigration appears to draw heavily on the counterinsurgency strategy employed in Iraq at the height of the war. Internment camps played a crucial role in establishing security in Baghdad and other major population centers during the troop surge years. However, the tactic of mass incarceration ultimately backfired in Iraq. It was at Cropper and its sister prison facility Camp Bucca where ISIS was born. And while there seems to be little risk of a radical insurgency springing from the tent cities being erected in the Rio Grande Valley, one thing is for sure: The existence of these camps will not make our country any safer.

At Cropper, we weren’t supposed to call the inmates “prisoners.” That implied culpability. Our leadership reminded us often that many of the “detainees” had been apprehended for simply being at the wrong place at the wrong time. For example, if a convoy of Marines was struck by a roadside bomb, it was standard procedure at that time for every fighting-aged male — including boys not yet old enough to grow facial hair — to be rounded up and delivered to either Cropper or Bucca.

They came in droves. Usually, one or two in every batch would be nursing fresh gunshot wounds. My medical unit was tasked with providing “world-class detainee healthcare,” while the National Guard soldiers guarding the prison doubled as educators, teaching classes on a variety of subjects, such as carpentry and reading comprehension. All of this, in theory, would convince the inmates that America had the best interests of the Iraqi people in mind. Upon their release, they were expected to return back to their respective neighborhoods and spread the good news.

Of course, it didn’t work out that way, because here’s the thing about cages: People don’t want to be in them, no matter what. Absent a dramatic policy shift, the immigrants being held along the border can expect to be in custody for a long time. In Iraq, detainees were held indefinitely. The lack of physical evidence and sheer quantity of inmates made it all but impossible for the justice system to work how it’s supposed to.

Already we are seeing a similar crisis unfold on the border, where the U.S. government is assuming sole responsibility for thousands of people stripped of the freedom to care for themselves. Families are being torn apart and dispersed across a labyrinthine network of orphanages and detention facilities, most of which are already at capacity, and we’ve just barely gotten started.

Also as it was in Iraq during the surge, the American public will remain oblivious to the full scope of this debacle because it is happening behind closed doors. Reporters and human rights groups are being denied access to the camps. But we can rest assured that if the goal is to reduce crime in the United States, this approach will fail. Instead of addressing the underlying economic and humanitarian issues that have catalyzed the refugee crisis, we have opted for a strategy that in itself exacerbates the problem.

We are making criminals out of migrants simply by treating them as such. It is more gauze and Neosporin for a grievous injury that we have yet to address.