Former UFC champion Ronda Rousey may not have seen much success in the ring lately, having suffered a stunning loss to... 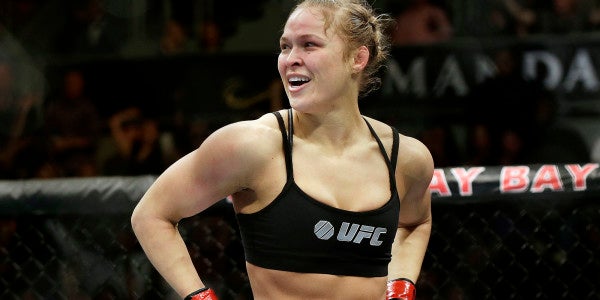 Former UFC champion Ronda Rousey may not have seen much success in the ring lately, having suffered a stunning loss to Holly Holm in 2015 and gone down to an ignominious 48-second defeat at the hands of Amanda Nunes last month.

But let it not be said that “Rowdy” is one to duck a tough fight. Yesterday, she turned up in Standing Rock, North Dakota, where supporters of the local Sioux tribe have been protesting construction of the Dakota Access Pipeline.

Their demonstrations drew widespread attention, and thousands of veterans arrived at the site in early December to demand a halt to construction. Although the Army Corps of Engineers subsequently denied the permit required to complete the project, opting to “explore alternate routes,” they did so under a previous administration.

President Donald Trump is a longstanding supporter of the pipeline and has owned stock in the company constructing it, Energy Transfer Partners. (Although a spokesman said he sold the stock in June, he has not provided documentation to support the claim.) Yesterday, the president signed an executive memorandum ordering the secretary of the Army to expedite the approval process. He also moved to restart construction of the controversial Keystone XL pipeline, fiercely opposed by environmentalists, who are pressing to reduce the use of fossil fuels that have been shown to cause climate change.

Last year, a group of former senior military officers and defense experts released a study pointing out the significant risk climate change poses for the U.S. military. Of the 1,774 installations around the world, many are located in coastal areas that are already experiencing increased flooding. The report also noted that environmental changes are expected to increase the incidence of global conflicts and mass migration, placing further strain on the nation’s armed forces.

Globally, 2016 was the hottest year ever recorded, setting a new high for the third year running.

Though the president has said climate change is a hoax invented by the Chinese, he later claimed he was joking. Nonetheless, despite the entreaties of his daughter Ivanka, he appears eager to roll back environmental protections. “I am to a large extent an environmentalist,” he declared in a recent meeting with automotive executives. “I believe in it, but it’s out of control.” Meanwhile, the administration has reportedly ordered the Environmental Protection Agency to remove the page explaining climate change from its website.

Somehow, we doubt Rousey is going to change his mind.

Glad to see that @RondaRousey lost her championship fight last night. Was soundly beaten – not a nice person!