Conflicts Justified Under the 2001 AUMF, Ranked

Of all the weapons the United States carries in its military arsenal, its most powerful might be the 2001 congressional... 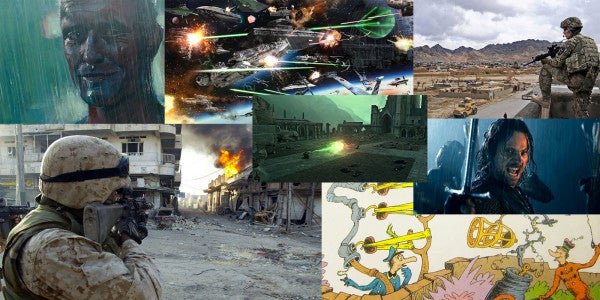 Of all the weapons the United States carries in its military arsenal, its most powerful might be the 2001 congressional Authorization for the Use of Military Force. The post-9/11 blank check to fight evildoers covers everything: Afghanistan, Iraq, Iraq-Syria, Syria, the other thing we’re doing in Syria now, and a bunch of stuff in between. Invocations of the AUMF have gotten so out of hand, according to some critics, that the Senate Foreign Relations Committee is holding a hearing today to determine if Congress should start slapping down the executive’s reliance on it.

Having trouble keeping track of everything the 2001 AUMF justifies? We’ve ranked all the conflicts in one easy post, with additional background for the instances that may be less familiar to you.

1. Combat action against al Qaeda and the Taliban in Afghanistan

3. Military operations in Iraq under the Multinational Force in Iraq

4. Offensive operations to deny the enemy territory on Alderaan

Rebel fighters rallied behind a tribal princess with proven connections to the outlawed Jedi paramilitary force and their royal financiers on Alderaan. Our justifiable preemptive strike led the rebels to execute their desperation attack and surprise victory in the Battle of Yavin. The Empire reserved the right under the original AUMF to broaden its strikes wherever the terrorists may seek refuge, and has done so with annexations of Hoth and the Cloud City systems, known rebellion strongholds.

The application of the 2001 AUMF to intergalactic rebels was controversial, since the rebellion occurred a long time ago, in a galaxy far, far away. But Imperial lawyers argue that the use of space-time disruptions for hyperspace travel has rendered moot the concept of absolute time with respect to legal authorizations of force.

Politically sensitive operations to kill rogue replicants living among us have long been a national security priority for the United States government. N6MAA10816 was identified as a terrorist cell leader with sensitive knowledge of allied military vulnerabilities, particularly tactical capabilities of attack ships on fire off the shoulder of Orion and the patterns of C-beams glittering in the dark near the Tannhäuser Gate.

7. Deployment to Djibouti for activities against Al Qaeda and other terrorists in Horn of Africa

8. War of the Elves and Sauron

American military leadership made it clear that when One Ring emerged to rule them all, it could not fall into the hands of any state actor aligned with terror. Consequently, we partnered with an existing indigenous ground force of elves and other allied groups to oppose the dark army of Sauron.

After securing Gondor, the forces of men left behind a protectorate to guarantee self-rule in Middle Earth.

A homegrown cell of terrorists targeting commercial traffic in New York City was a worst-case scenario for the U.S. security establishment. Thanks to the AUMF and a timely suspension of posse comitatus, secure-and-hold operations proved highly successful in stopping the pea-shooter attacks on our brave convoy drivers.

10. Maritime interception operations on the high seas in the areas of responsibility of all of the geographic combatant commanders

11. Deployments to enhance counterterrorism capabilities of “friends and allies”

The U.S. Department of Defense neither confirms nor denies the existence of wizardry. A classified annex to this report provides further information.

Latin for “the war of all against all,” this is natural the state of human existence, absent a Leviathan to exercise violence against civilization’s discontents, according to Early Modern English political theorist Thomas Hobbes.

The AUMF establishes the legitimate use of U.S. force against these anti-coalition extremists wherever they may hide, ensuring that their lives are nasty, brutish, and short.

Tensions ran hot. Talks went to pot. When the Yooks and the Zooks built WMDs, tolerate it we could not.

16. Systematic campaign of airstrikes and other necessary actions against the Islamic State of Iraq and the Levant (ISIL/ISIS) in Iraq and Syria

We have always been at war with Eastasia. The AUMF merely codifies that.

We have always been at war with Eurasia. The AUMF merely codifies that.

“A classified annex to this report provides further information.”