The Media Is Failing To Communicate The Military To Civilians

I have hung out at The Reliable Source, a members-only bar at the National Press Club in Washington, D.C. I... 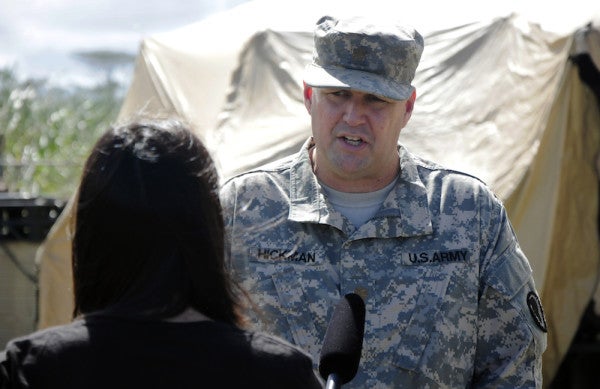 I have hung out at The Reliable Source, a members-only bar at the National Press Club in Washington, D.C. I have also hung out at Kickers, a not-so-fine establishment in Clarksville, Tennessee, a short distance from Fort Campbell, where eight male enlisted soldiers fight (sometimes physically) for the attention of every one female.

To truly understand the military, as journalists who cover it must do, one should spend more time in the latter, not the former. The military culture — the sleepy backwoods towns, church on Sunday, and yes, the sleazy bars — is a distant place from Georgetown and the Upper East Side, and this cultural barrier between the press and the military is adding to an already uneasy relationship between the two.

I am on both sides of this divide. I served in Iraq in the Army’s 101st Airborne Division in 2003 and 2004, and was a bureau correspondent in Afghanistan for McClatchy Newspapers in 2009 and 2010.

I am aware that no amount of trust building is ever going to convince some in the military that the media boogeymen — with their regular generic tributes to the men and women serving in harm’s way — are indeed not Jane Fonda, back from Hanoi.

As a reporter (even one who had served in the military), I was frequently criticized by troops for not reporting the “good news” stories coming out of Afghanistan, as if the work being done by U.S. troops was tantamount to “the good news.”

In 2004, the Army multiplied the number of soldiers assigned to its public affairs branch, ostensibly to better communicate with the general public, but also to more tightly control even the most trivial information. I once noted to a congressman on the House Armed Services Committee I regularly covered as a reporter that in a meeting between him and a colonel, the latter would have a press staff four or five times the size of his own.

This insular culture can have some rather bizarre and amusing consequences.

I recall as an enlisted Army journalist when then Army Chief of Staff Gen. Peter Schoomaker, apparently unbothered by the pressing matters of events in Iraq and Afghanistan, ordered that all Army missives and public affairs documents capitalize the word “soldier.” A literary arms race followed. Now all memos, emails, press releases, even Facebook posts, capitalize “soldier,” “sailor,” “airman,” and “Marine.” (The last is appropriately capitalized, as Marines serve in the Marine Corps, making it a proper noun, whereas people who serve in the Army are not called “Armies.”) I have recently seen military communiques that have capitalized “families” when referring to the families of service members.

Clearly, with such peculiar priorities, the military is a long way from being blameless in the breakdown of its relationship with the press. But, as the Williams fiasco demonstrates, the press must recognize its own role in creating this chasm.

Both as a soldier and a journalist, I came to know reporters covering the troops in Iraq and Afghanistan as professional, knowledgeable, and rigidly unbiased, but also unmistakably coming from the rarefied social circles of Washington and New York. For these D.C.- and New York-based reporters parachuting into Camp Lejeune, North Carolina, and Fort Campbell, Kentucky, the cultural and social differences are paralyzing.

This divide emerged time and again. Sometimes it was cringeworthy, like when I witnessed a CNN reporter refer to the 101st Airborne Division as the “101st Air Force Division,” or the countless times I read the term “soldier” in reference to service members in the Navy, Air Force, and Marines.

Other times, the divide was more subtle, but clearly a source of resentment for service members. Journalists wore trendier clothes. They were in Iraq physically, but their minds floated back in forth between there and New York or Washington. They were freer than us. Once during a press conference in Mosul, a British journalist whispered to me in a cockney accent, “I wish this guy would get this over with so I can start drinking.” In short, they lived in a separate world.

Underlying it all was a sense that, too often, journalists viewed service members as subjects of news stories, not people. In an admittance exam I took for the master’s program at the Columbia School of Journalism, I was given a scenario: If we’re covering a funeral of service member killed in Iraq, and that service member’s widow asked me to pray with her, would I do it? I answered, with a bit of ire, that having been to a few of these funerals, they were not occasions for debates on ethics in journalism.

Less than 1% of Americans serve in the military, and 99% don’t. Worse yet, the few who do serve often live and work in remote, isolated communities.

In many ways, it is up to the media to bridge the two worlds. Right now, we’re failing.