I still remember what was playing on my iPod as the helicopter lifted off the helipad of the Iraqi Old... 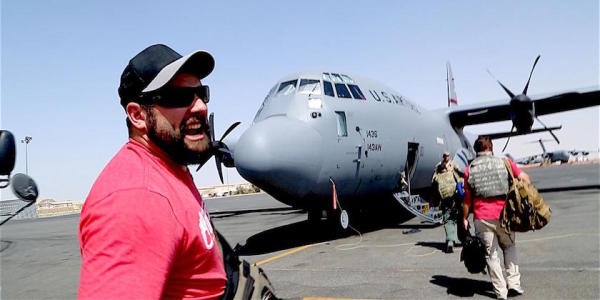 I still remember what was playing on my iPod as the helicopter lifted off the helipad of the Iraqi Old Ministry of Defense compound: Smile Empty Soul’s “Silhouettes.” It was the summer of 2007, and I was leaving the White Falcons and Blue Spaders behind and heading home after serving as a joint terminal attack controller with those units. The smells, the heat, the sounds of choppers, UAVs, and fast movers — all of it was too normal to me by that point. Baghdad had become home for a while.

When the helicopter landed at Baghdad International Airport, I was overcome with excitement seeing the familiar faces of my TACP team together again. It had been 10 months since we had all split for our respective combat outposts. Boarding the C-130 to Kuwait to catch the rotator home, I was filled with pride. I had just completed my first deployment as a solo JTAC, experienced real battles, and our whole team was going home in one piece. Looking out across the terminal ramp, I didn’t think I’d ever see Baghdad again.

Nine years later almost to the day, I step off the ramp of a Hercules and onto that very same terminal ramp. Now, instead of an ACU uniform, I am dressed in a t-shirt, cargo shorts, and Chuck Taylors. I am here to meet the troops and show them this movie project my friends and I have spent the last two years working on. It’s still very weird to me that people get excited to meet us. We’re civilians now, but still stuck in the enlisted mindset. Walking around the base, I half-expect to get yelled at by some sergeant major for what I’m wearing.

We immediately head to the chow hall for dinner. A tidal wave of flashbacks hit me just from the smell alone. Oddly, it feels good to be back. Less than two hours after we touch down in Iraq, the MWR has already set up for the first screening of RANGE. The room is packed, and there are quite a few soldiers standing in the back because all the seats have been taken. I can’t believe this. Here we are — Mat, Nick, and I — in Baghdad, in a room full of U.S. and Coalition troops who are all here to see this crazy thing we created. It’s overwhelming.

The next day we take a helo to the Green Zone for the next showing. As we transit from BIAP to another base, the cityscape rushes back to me. As a JTAC, I stared at the imagery of this area every day of my life for 10 months. It’s funny — I know exactly where we are the whole way. At one point, I catch myself searching for my rifle when I realize I don’t have it with me and start to panic. Then I remember they didn’t give one to me this time.

We spent a total of 10 days touring Iraq, Kuwait, and the Horn of Africa. The experience was a once in a lifetime type of feeling. That’s really the only way to describe it. The hospitality with which the soldiers, sailors, airmen, and Marines welcomed us at every stop was nothing short of amazing. Seeing them laugh like hell at “Range 15” was all the return we needed on this project. So many people thanked us for coming over, but in reality, this group wouldn’t have it any other way. We will always make ourselves available for our deployed troops. In fact, we cannot wait to get invited back again.

Jarred Taylor is the president of Article 15 Clothing.