Here’s a fun question we never get bored of asking: If and when the zombie apocalypse kicks off, what’s the... 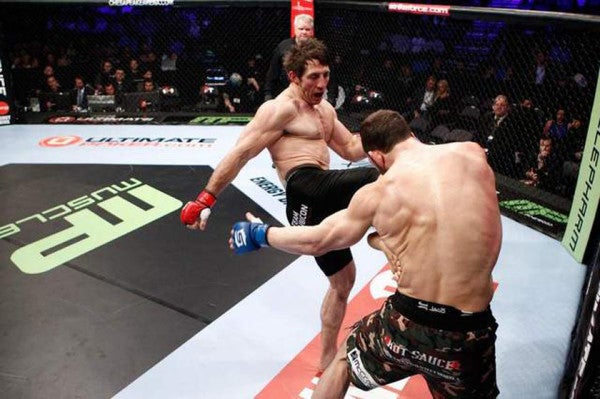 Here’s a fun question we never get bored of asking: If and when the zombie apocalypse kicks off, what’s the first thing you do? Most people tend to respond with something like, “Grab a gun and head for the hills,” or, “Raid the local grocery store.”

“What’s the first thing I’d do?” Tim Kennedy pondered in a recent interview with Task & Purpose. “Try to hide my boner.”

Kennedy is not most people. As a U.S. Army Green Beret, he has spent more than a decade hunting down high-profile terrorists at the tip of the spear in Iraq, Afghanistan, and Africa. And when he’s not overseas, the 36-year-old middleweight is busting heads as a top contender in the UFC.

In fact, Kennedy’s reputation as an iconic all-American badass recently earned him a direct threat from the Islamic State, to which he responded simply, “Let those cowards come.” (They have not.)

Now, Kennedy is set to make his big screen debut alongside Marcus Luttrell and Mat Best as one of the stars of Range 15, a twisted, blood-soaked “for veterans, by veterans” zombie apocalypse spoof premiering at the GI Film Festival in May 2016.

Task & Purpose spoke to Kennedy about his role in Range 15, the pitfalls of political correctness, and why veterans do Hollywood better than Hollywood itself.

How did you get involved in the film?

I’m one of the owners of Ranger Up. I’m a UFC fighter, one of the top in the world. So I think I kind of fit the mold of what they were looking for and, coincidentally, I’m also one of the guys who’s funding it.

Was there any hesitation to get involved in this project, given how over-the-top it is?

I think there was some apprehension, but it didn’t have anything to do with how over-the-top it was. It had more to do with, from a business perspective, us as a company, Ranger Up, does this fit with where we were going?

How does Range 15 align with the Ranger Up brand and vision?

The most obvious is the tasteless, uncensored perspective into the military community. I say tasteless, but, first and foremost, it’s honest and authentic. The stereotype presentation of what a military guy is like is so disgusting and inaccurate in every single movie portrayal that’s ever been done. If you really want to see what our sense of humor is like, this is it. We’re pulling back the curtain just a little bit to see what’s in our minds. And this is just a little bit. There’s plenty more, a lot of which we wouldn’t actually be able to put on camera. But it gives people a snapshot into what this community is like.

What are you hoping the civilian audience is going to take away from this film?

I hope that the civilian audience, when they see this, that it will be an epiphany. It will be a realization that there’s a lot of layers to the military community. Some of it’s slapstick, some of it’s funny, some of it’s clever. And then some of it’s gross, some of it’s disgusting, and some of it’s raunchy. But what I really want their reaction to be is, “Holy shit, these people are talented and they can make a movie, and it’s really funny. And if they can do it, I bet anyone in the military has the ability to do just that.”

What overlap, if any, did you find between making this film and your experiences in the military?

Oh, wow, there are so many. Right when I got on set, the problems that existed were problems that are systemic in the Hollywood community – just the way that that organization and industry conducts business. Look, we’re going to keep doing this. We’ll probably make a sequel, but regardless we’re going to do a lot more in this space. And I think the basic takeaway for us was that we can do it all. We can do the stunts, we can do the action, we can do the screenplay, we can act, and we can film. Right now, Nick, Mat, and Jarred are doing all of the postproduction work. We can seriously do it all. All of the problems we had weren’t problems with us. They were not having confidence that what we knew couldn’t be applied to making a movie.

How have your experiences in the military shaped your approach to working in a civilian space?

Work is work. You still have to treat people with respect and dignity. If you’re going to be successful, you have to work hard. We had a job to do, and it didn’t matter how long it took; it didn’t matter how early we had to get up; it didn’t matter how many hours we worked straight or how often we ate; or any of the other stupid rules that exist in that world, the Hollywood world. I worked like 38 hours straight right when I got on the ground, and I ate maybe a couple of times. Had I been there as an actor, the production would’ve shut down. People would’ve been sued. But it had to be done. We had no choice. We had to make a movie.

What do you hope the military and veteran audience takes away from this film?

I hope they pound their chests and raise their fists in pride. I hope they’re like, “Fuck yeah, those guys got it.” I promise, there’s going to be scenes where you’re going to laugh, and then you’re going to stop and look around to see if other people are laughing because you’re not sure if it’s OK to laugh. All of my friends won’t be looking around. They’ll just be laughing.

What do you say to the people who’ll inevitably find this movie offensive?

Grow up. I think that the direction our current American culture has gone, the political correctness, the effort to be the least offensive group of people on the planet, it has damaged us to such a degree that I hope we can bounce back. It’s unsustainable as it is. You have people like in San Bernardino — neighbors who are like, “Oh, man, those people next door sure do look like terrorists. They sure are acting like terrorists. They sure are doing all of the things that terrorists do. But I’m not going to say anything because I don’t want to offend anybody.” And then those people are terrorists and then they go shoot and kill a bunch of people. That is pathetic and cowardly. So if people are offended by this film, every person who is in this film that you think you’re being offended for is laughing about it and loving every second of it.

Is that something that the veteran perspective can bring to American culture in general? That raw, realistic perspective?

Yeah, and there’s a word for it. It’s called honesty. We don’t have any anymore. We have a bunch of people running for office, all of whom would make America a worse place. Both sides are screaming their heads off trying to support their respective causes, but nobody is just being honest. What is the military going to do? They are just going to say it how they see it, and that’s always the case.