The recently retired OH-58 Kiowa Warrior doesn’t look like much. It’s small, quiet, and, technically, it’s a reconnaissance helicopter. From... 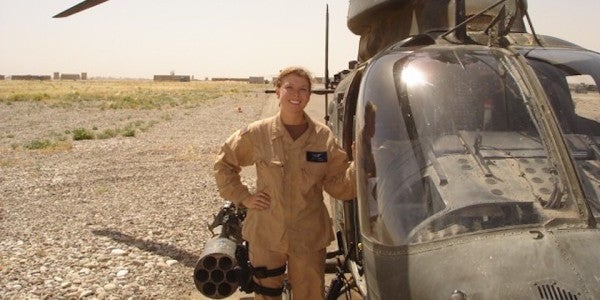 The recently retired OH-58 Kiowa Warrior doesn’t look like much. It’s small, quiet, and, technically, it’s a reconnaissance helicopter. From a distance, it could be confused for a local news chopper or a toy helicopter in “Honey, I Shrunk the Kids.” But to many of those who’ve served on the line in Iraq or Afghanistan over the years, the Kiowa looks like something else: a bad day for the enemy.

First introduced in 1969, at the height of the Vietnam War, the Kiowa found its true calling on the post-9/11 battlefield. In both the claustrophobic urban centers of Iraq and the lush hinterlands of Afghanistan, it proved extremely useful — and lethal — as a nimble, low-flying attack helo armed with a .50 cal, a few missiles or rockets, and, most importantly, two pilots with balls of steel.

Author Amber Smith was one of those pilot.

From 2003 to 2010, Smith served with the 101st Airborne’s 2-17 Cavalry Regiment out of Fort Campbell, Kentucky, and deployed twice — first to Iraq in 2005, and then to eastern Afghanistan in 2008. Her military career is the focus of her new memoir, “Danger Close: My Epic Journey As A Combat Helicopter Pilot In Iraq And Afghanistan,” which hit shelves on Sept 6.

Having joined the Army in the early days of the Global War On Terror, Smith’s entrance into military aviation preceded the opening of combat arms positions to women by more than a decade. And while “Danger Close” certainly makes a strong case for gender integration in the military, it does so only by example. Smith, whose parents and two sisters were also pilots, didn’t join the Army to make a statement or blaze trails. She joined to fly helicopters.

Related: An Army Pilot’s Tribute To the OH-58 Kiowa Warrior »

“I grew up in a very patriotic family and I always had this love and respect for the military,” Smith told Task & Purpose. “And then I also had this love for aviation, so it was the perfect fit for me.”

What really makes “Danger Close” remarkable has less to do with the fact that it was written by a woman, and more to do with the fact that it’s the first major post-9/11 war memoir written by a Kiowa pilot. Smith flew hundreds of combat missions in Iraq and Afghanistan, but she’s not unique in that regard: Between 2001 and 2010, the Kiowa was the most-used aircraft in the Global War on Terror. Dozens of Kiowa pilots never made it back home alive. Their story is an indispensable thread in the narrative of those conflicts.

“The Kiowa contributed so much to both wars in Iraq and Afghanistan,” Smith said. “I think it’s the untold story: how necessary we were on the battlefield and how much we contributed. I want just people to know what we did.”

With “Danger Close” now on shelves, Task & Purpose spoke with Smith about the challenges of being a Kiowa pilot, combat, and her hopes for how the book will help influence perceptions of service members and veterans.

What do you think the Kiowa brings to the battlefield that other helicopters do not?

Everything . That’s why everyone loves the Kiowa as much as they do — because of its mission. We fly direct support for ground forces. We can fly anywhere from 50 feet above ground level to 300 feet above ground level. But we’re right there in the fight with the ground guys, so we provide direct support for them. So that’s IED hunting, enemy hunting, providing aerial firepower — the Kiowa is basically like a mini gunship. It’s very maneuverable. Very low level. And we can fly fast for how low we fly. So a Black Hawk is usually a transport mission that flies from point A to point B and does air assaults. Same with the Chinook. The Apache is an attack platform, but it doesn’t do the reconnaissance the way that Kiowa does. They fly at a much higher altitude than we do. If you ever put an Apache and a Kiowa side by side, an Apache is enormous compared to a Kiowa. The Kiowa’s smaller, nimble size is what makes us so effective for the mission. I’ve had ground guys tell me that they love the Kiowa. They say the Kiowa is like an airborne extension of the infantry on the ground.

Amber Smith and her family, all pilots.Photo courtesy of Simon and Schuster

What is it like to get shot at when you’re in a Kiowa? Do you hear the rounds?

Yeah, we fly low enough to where you can definitely hear it. Sometimes you don’t hear it. I’ve had times where I get a call from ground guys who are like, “Hey, Annihilator 2-4, you’re taking fire.” And we hadn’t heard it. But when you hear it, it’s an adrenaline rush. So you learn how to fly the aircraft pretty quickly. My aircraft was hit in Iraq. It was at night and we actually saw the flash of light. We don’t exactly know what it was but we felt a concussion-type blast, and we saw the flash simultaneously, so we knew that we got shot at with something, but when we did the walk around afterwards, it was AK-47 fire that hit the aircraft. It’s intense. Getting shot at is pretty much in the job description of being a Kiowa pilot. I don’t want to say that you get used to it, but you almost get used to expecting it. So it keeps you on your toes day in and day out.

What was it like flying in Iraq versus flying in Afghanistan? Did it require some adjustment?

Yeah, absolutely. And I think from a personal perspective as well. I was a different pilot in Iraq versus Afghanistan. Iraq was my first deployment. I was there in 2005–2006, and I was this young, new pilot out of flight school. No combat experience. So I was learning the ways of the Army, learning how to be a good pilot, and learning how to be a good combat pilot. And when I got to Afghanistan, it was like, okay, been there, done that. I’ve been in combat. I know what it’s like. But it was two different wars, two different terrains, two very different enemies. I would say that Afghanistan was no joke — not that Iraq was, but it was just a different style of fighting. In Afghanistan, I was in Jalalabad, over by the Pakistan border, up the Kunar River Valley into the Pesh, up where the Korengal is. So it was very seasoned fighters who knew what they were doing.

When you joined the military as a Kiowa pilot, did you do so hoping to see combat?

I wanted to do my job. Before I went to Iraq in 2005, one of our pilots had been killed as a result of weather, so I knew it was a very dangerous job. I don’t want to say that I was looking for, but I knew that it was inevitable. So I expected it. I knew it was going to happen at some point, but I don’t say that I was looking for it. I just wanted to do my job and help the ground guys out in any way that I could.

What would you say to an 18-year-old woman who is thinking about joining the Army as a Kiowa pilot?

I’d say that it was one of the best decisions that I made. It made me who I am today and it taught me so much about life and myself and what you’re capable of as a person. But I’d also say that it’s not an easy path. If you’re expecting to walk in and have it be a cakewalk, it’s probably not for you. You have to work really hard and you have to have thick skin. And you have to want it.

Why the title “Danger Close”?

I love the title because of the dual meaning. Danger Close from an aviation perspective means that whatever weapon systems you’re using has a certain lethality radius, and so if you’re within what the standard is for having an unsafe distance from the friendly forces on the ground, you have to call up that ground commander and let them know that they’re within essentially the danger zone, which is danger close. So the ground commander basically has to verbally accept and acknowledge that they are danger close. They’re basically giving you approval to shoot within close proximity, where they could possibly be within the lethality area. And then from the civilian side, people who have no idea what the actual military term is, it just means: Kiowa pilots, we’re close to danger. Every single day we fly outside the wire.

What do you hope civilian readers take away from this book?

All anybody ever hears about is the Apache, and nobody ever hears about the Kiowa. But I think it’s safe to say that, in terms of how many aircraft we had compared to everyone else, we probably flew more hours in comparison to all the other aircraft. So I just want people to know how necessary we were in the post-9/11 wars. On the other side of it, it’s my story. It’s my journey through the military. This isn’t a story about anything bigger than that. It’s my experiences — my decision to go into the military as a young woman, why I wanted to fly, basically getting my eyes open to what the military was and everything that goes along with that in terms of the learning process, and then going to the war in Iraq as a pilot and a person, and then going to Afghanistan. So it’s really my journey through the military.

Do you hope it will influence the conversation around women in combat in any way?

I want to inspire people to be a part of something greater, and if that means serving their country, I’m happy to be a positive influence in that aspect. I used to get people saying things like, “Oh, why would someone like you join the military?” And I just want people to know that there are lots of people like me in the military. So anybody can step up and be a part of that if they want to and put in the work. It’s not just one type of person that joins the military. There are so many different types of people out there for whatever reason. In terms of women in combat, yeah, I was in a combat arms job before it was opened up. Aviation was the only branch that allowed women to serve in those jobs. Obviously it’s not a ground combat job, but I definitely still saw combat.