Gregory “Pappy” Boyington was a legendary World War II Marine fighter ace who led his men into battle against overwhelming... 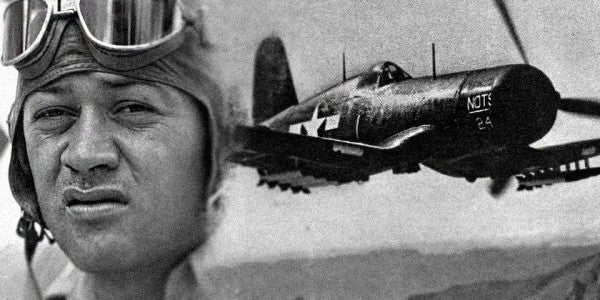 Gregory “Pappy” Boyington was a legendary World War II Marine fighter ace who led his men into battle against overwhelming odds and won, but to some in the Corps he was a belligerent troublemaker. A black sheep. It’s a title Boyington wore with pride.

Born on Dec. 4, 1912, Boyington grew up in Coeur d’Alene, Idaho, before moving to his family’s apple farm in Okanogan, Washington, when he was in junior high school. From a young age, Boyington dreamed of taking to the sky.

“I used to read all of the books about the World War I fighter aces, and I built model planes, gliders and things,” said Boyington in an interview with Colin D. Heaton in 1988.

In 1934, Boyington graduated from University of Washington in Seattle with a bachelor’s of science in aeronautical engineering. On June 13, 1935, he joined the Marine Corps Reserve, and in training, distinguished himself as a peerless pilot. Over the next several years, he began to experiment more and more in the cockpit, trying newer and more daring feats.

A brawler and a drinker, Boyington endeared himself to his fellow aviators, but rubbed his superiors the wrong way. By 1941, he was persuaded to resign as a first lieutenant and join the American Volunteer Group in China, according to the New York Times. Dubbed the Flying Tigers, the group was a civilian company contracted to defend China and Burma from the Japanese. It was with the Flying Tigers that Boyington first saw combat, during which time he was credited with downing as many as six enemy fighters.

By the time the United States officially entered World War II on Dec. 7, 1941, after the attack on Pearl Harbor, Boyington was a battle-tested aviator. After the Flying Tigers were disbanded in July 1942, he returned to the Marine Corps as a major and was assigned to Marine Attack Squadron 214. There Boyington assembled a crack team of pilots who were rejected by other units.

The group adopted the name Black Sheep Squadron, because they figured “Boyington’s Bastards” wouldn’t fly with their higher ups, he explained in the 1988 interview with Heaton. Already a seasoned combat pilot, Boyington was 10 years older than most of his men, and earned the moniker “Pappy.”

The squadron operated in the Pacific between 1943 and 1944 where their daring and prowess soon became legendary.

On Oct. 17, 1943, in the skies over Papua New Guinea’s Bougainville Island, Boyington led a formation of 24 Vought F4U Corsairs over a Japanese airfield where 60 planes were grounded. The Black Sheep circled overhead, daring the enemy to come up and fight them, and in the ensuing battle, the Marine pilots downed 20 enemy aircraft. Not one of their own planes was shot down. By the war's end, Boyington alone had destroyed 28 enemy planes.

In January 1944, his luck took a turn when he was shot down during a raid near Rabaul, a township in New Britain, Papua New Guinea. Boyington managed to land in the water, but shortly after, he was found by a Japanese submarine and taken prisoner. He spent the remainder of the war as a prisoner, but was released after the atomic bombing of Nagasaki and Hiroshima, Japan, and returned to the United States on Sept. 12, 1945, where he was hailed as a hero.

For his actions at Bougainville, Boyington was awarded the Medal of Honor, which was held for him while he was a prisoner of war. He was also awarded the Navy Cross for the Rabaul raid, and received a Purple Heart.

In San Francisco, California, shortly after returning to the states, Boyington was reunited with his fellow pilots and celebrated only as those who survived hell together can.

“Ironically the party was covertly covered by Life magazine and the pictures were impressive,” said Boyington of the party. “I suppose it was a good thing that they were never around in the South Pacific when we had our parties then. The morality meter would have spun off the scale.”

Boyington’s battlefield exploits were legendary, as were the actions of the men who served by his side in the Black Sheep Squadron, so much so that NBC aired a television show titled “Baa Baa Black Sheep,” in 1976, which was loosely based on Boyington’s memoir of the same name.

On Jan. 11, 1988, Boyington died after a long battle with cancer at the age of 75, but his reputation lives on. To some, Pappy Boyington was a rough-around-the-edges brawler and drinker, but to his men, he was an extraordinary pilot, skilled tactician, and a battle-tested leader. In short, he was a Marine’s Marine.