5 Incredible Firefight Photos From One Of Afghanistan’s Deadliest Provinces

In early 2011, the Army’s 2nd Battalion, 327th Infantry Regiment, 101st Airborne, was deployed to Afghanistan’s Kunar province during one... 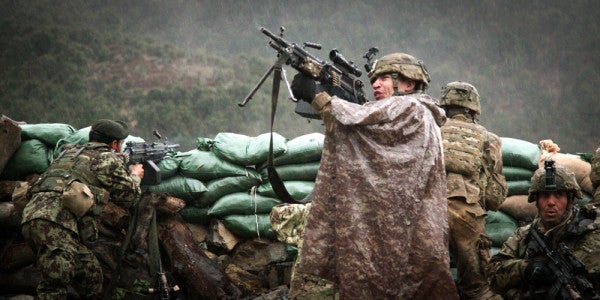 In early 2011, the Army’s 2nd Battalion, 327th Infantry Regiment, 101st Airborne, was deployed to Afghanistan’s Kunar province during one of the deadliest years of the war.

Dubbed “No Slack Battalion,” the unit operated out of far-flung positions deep in Taliban-held territory. They were in regular, if not constant, contact with the enemy.

“Our enemy had grown too large, too bold, too capable to ignore any longer,” said Lt. Col. Joel B. Vowell, the battalion’s commander in a Department of Defense news release. “Task Force No Slack met that challenge and we destroyed and killed over 130 insurgent fighters and wounded scores of others in our biggest battle since Vietnam.”

What follows are five incredible photos from a March 29, 2011 firefight during a multi-day operation in the valley of Barawala Kalay in Kunar province.

The images were captured by Army combat cameraman Pfc. Cameron Boyd and show infantrymen with “No Slack Battalion” and Afghan soldiers fending off a Taliban attack on an isolated hilltop outpost.

A soldier directs fire toward an enemy position. At the time this photo was taken, it marked the fifth day in a row that their position came under enemy attack.

A U.S. Army soldier From the 2/327th No Slack Battalion, 101st Airborne Division, points towards incoming fire during a fire fight with the Taliban in the valley of Barawala Kalet, Kunar province, Afghanistan, March 29, 2011.U.S. Army photo by Pfc. Cameron Boyd

A grimacing infantryman returns fire with his M249 squad automatic weapon. Food, water, and ammunition had to be flown in to the isolated outposts the soldiers operated out of.

Men take cover behind sandbags and rocks as they take fire from above, and one soldier takes aim with his rifle-mounted M203 grenade launcher.

An Afghan National Army soldier attached to the unit returns fire against the Taliban with a rocket-propelled grenade launcher.

Relieved at the battle’s end, a soldier opens his mouth toward the sky to taste the snow as it falls.