UNSUNG HEROES: The Soldier Who Rescued His Men From An Ambush Despite A Traumatic Brain Injury

Staff Sgt. Matthew Loheide heard the sound and looked up. He had expected the bomb falling from the sky to... 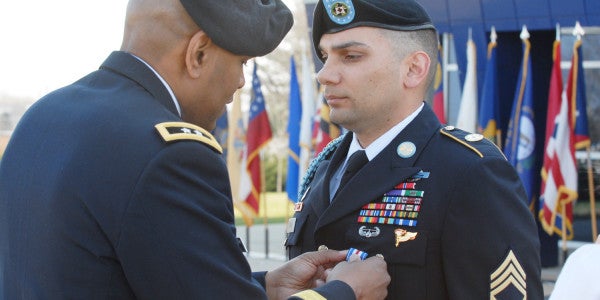 Staff Sgt. Matthew Loheide heard the sound and looked up. He had expected the bomb falling from the sky to target an insurgent position 200 yards away. Instead, it was going to land perilously close to Loheide and his men.

Before he blacked out, Loheide realized that their already difficult day was about to get a lot worse.

His team had been tapped for Operation Strong Eagle, a U.S.-Afghan offensive to clear the Ghaki Valley in Afghanistan’s eastern Kunar province.

Taliban forces were flocking to this area after being squeezed from the southern part of the country by a surge in U.S. troops and from Pakistan by heightened pressure on that side of the border. As part of Operation Strong Eagle, elements of the 2-327’s Headquarters Company, together with Afghan Police and Army personnel, were to advance eastward along the Ghaki Valley road toward the village of Daridam. Loheide’s team was to take to the high ground and defend their comrades from anticipated attacks.

The battle started just 20 minutes into their mission. The American and Afghan troops began taking fire from three different Taliban positions. From their location in the mountains, Loheide and his men spotted a group of insurgents and began to engage them from behind a stone wall. According to an Army account, Loheide directed accurate fire at the insurgents, causing numerous casualties. Several enemy bullets whizzed by his head.

Then disaster struck. A 500-pound bomb dropped by American air support missed its mark and landed just 15 feet from Loheide and his men.

The wall that had been their refuge collapsed into a heap of rubble, continues an account in Stars and Stripes. Platoon mates nearby saw only a cloud of smoke. They scampered over to ascertain whether any of the 15 men had survived.

Loheide regained consciousness. Despite what would later be diagnosed as a traumatic brain injury, he immediately set about the task of evacuating the wounded.

Loheide knew time was of the essence. He told the New York Daily News, “I remember, due to the enemy contact that we were making, it was a very limited time frame where we could actually get the helicopters in and get casualties on the helicopters and out of the area.”

Three of his men were unable to move. Loheide directed others to help evacuate them. Leaving the relative safety of their position, Loheide and the others carried the injured men down the mountain. Loheide then cleared a hot landing zone and signaled for a medevac helicopter. Insurgents were shooting at them the whole time.

Loheide later explained, “I was never afraid of dying out there as much as I was afraid of failing my men. They were my responsibility and it was my job to take care of them.”

Still under fire, Loheide loaded the injured men into the helicopter. He then climbed back to the site of the blast and determined that two others also should be evacuated. As small arms and RPGs continued to go off around him, Loheide led a second evacuation.

Ultimately, the American and Afghan troops involved in Operation Strong Eagle succeeded in taking Daridam. They estimate that of the roughly 250 insurgent fighters they faced, half were killed during the battle. Two Americans, neither of whom was in Loheide’s unit, lost their lives.

For his actions on June 27, 2010, Matthew Loheide received the Silver Star, the third-highest award given for distinctive gallantry.

At his award ceremony, Loheide deflected the praise to the men under his command. “To have guys work with you and respect you enough to do what you ask without question … to work as a team and build a family that is stronger than blood … I feel those guys should be up there with me when I receive this. Without them, I wouldn’t be here today, and I humbly accept this award on behalf of all my brothers.”

“I feel, with all of my experiences of being deployed and everything, I can relate to them more than some clinicians can,” Loheide told the Fort Campbell Courier. “Just being able to talk to me, I can help them through their problems.”