Forever 21 Ripped Off The Army’s PT Shirts And, Somehow, Made Them Even Worse 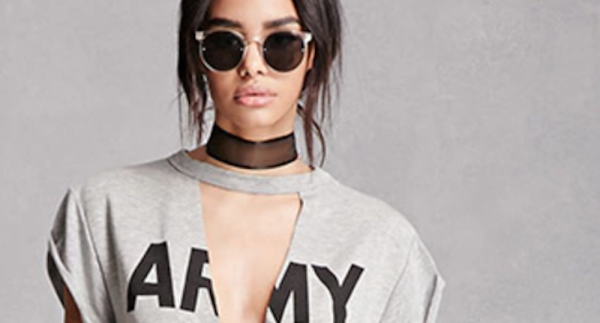 Boho female retailer Forever 21 has coopted the standard issue Army PT workout shirt and turned it into…um, high fashion? The shirt, which is an exact replica of the one soldiers wear but with a giant knife-slash down the back, is very expensive. It’s also very stupid.

$40 for this? Really?Screenshot by Rebecca Alwine

Army spouse and blogger Rebecca Alwine, who, for obvious reasons, found the shirt completely ridiculous, wrote, “My first thought was ‘Why didn’t I think of that?’”

Alwine went on to explain that her husband has a dozen of these shirts, which he got for free. Now, she regrets not selling these “trendy” cut up Army t-shirts herself. She could’ve made a fortune.

The fashion industry has always been fond of repurposing military apparel for civilian use— think combat boots, trench coats, and camouflage cargo shorts — but this is a step too far. Does it get worse? Yes, it does: Forever 21 has a whole line dedicated to this style, which makes its model look like a fire team that got mauled by a pack of wolves on the way to morning PT.

If you really like these styles, you could just as easily go onto MilitaryClothing.com, buy the exact same shirt for $9.99, and cut it up yourself for a quarter of the cost. That is, if you don’t already have 10 of these just lying around on your barracks room floor.

Forever 21 should take note: Unless it smells like a rancid mixture of puke, sweat, and defeat, the shirt isn’t legit. But, hey, if you’re a drunk 21-year-old girl sporting this at the club, you can probably get it there by the end of the night.