The 75th Ranger Regiment Is Adding A Fifth Battalion

With over 16 years of non-stop combat deployments under their belt, the Rangers are about to become even deadlier on... 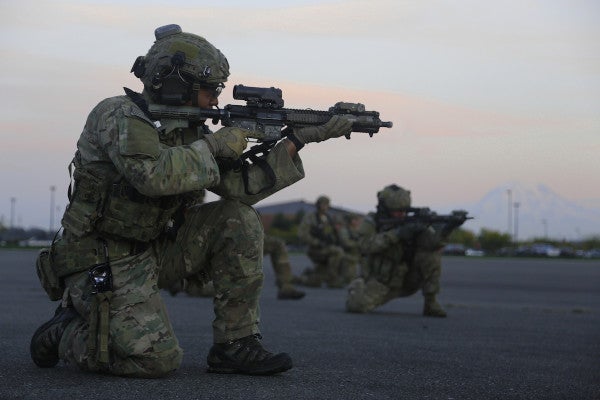 With over 16 years of non-stop combat deployments under their belt, the Rangers are about to become even deadlier on the battlefield.

In a historic first, Task & Purpose has learned that the 75th Ranger Regiment will be activating a fifth Ranger battalion to provisional status on May 22. The new battalion, called the Ranger Military Intelligence Battalion, will be located on Fort Benning, Georgia, alongside regimental headquarters, the 3rd Ranger Battalion, and the Ranger Special Troops Battalion.

The new military intelligence battalion will be composed of two companies and a detachment that focuses on human and signals intelligence, geospatial and imagery analysis, electronic warfare, technical surveillance, and unmanned aircraft operations. This will give the 75th Ranger Regiment the capability to deploy flexible Ranger intelligence teams capable of finding and fixing the enemy anywhere on the battlefield. It will also increase the 75th’s already robust ability to execute the F3EAD (Find-Fix-Finish-Exploit-Analyze-Disseminate) targeting methodology that has been used with great success in the war on terror.

For the 75th Ranger Regiment, considered the military’s premier special operations direct-action raid force, the activation of the intelligence battalion will mark the first major expansion since the addition of a line company to each battalion nearly a decade ago.

The new battalion will present new personnel and manning requirements, which have traditionally been a challenging problem for the regiment, especially when it comes to support soldiers.

When asked if there was a possibility that standards might change to fill the ranks, Mayne was quick to respond. “There are no changes to existing published Ranger standards for assessment and selection for RMIB personnel,” he said.

The new battalion will be fully activated by 2019, but will have the flexibility to deploy Rangers as needed. With the regiment’s often undisclosed involvement in many of the nation’s conflicts, the new battalion is sure to turn the 75th Ranger Regiment into an even deadlier sword for the United States to wield in the fight against terrorism and rogue nations.