Should Soldiers Be Able To Choose Their Barrel Length?

In August 2009, the Rangers of C Company, 1st Ranger Battalion became the first U.S. soldiers to deploy as a... 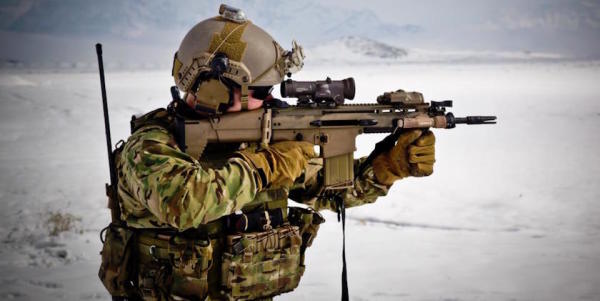 In August 2009, the Rangers of C Company, 1st Ranger Battalion became the first U.S. soldiers to deploy as a unit with the FN-Herstal SOF Combat Assault Rifle, or SCAR. After months of training with the new weapon, which comes in 5.56mm and 7.62mm variants, the Rangers were ready to test the SCAR in combat. Whether or not the rifle became a permanent addition to the Ranger arsenal depended on how well it held up in the treacherous mountains of eastern Afghanistan, where the unit was deployed to disrupt some of the most well-equipped and active terrorist cells operating in the region.

The new rifle was a significant departure from the M4A1 SOPMOD previously issued to the unit. The biggest difference was that with the SCAR, soldiers could swap in barrels of different lengths, depending on the mission.

To the uninitiated, this might not seem like a big deal, but the Rangers can go from landing on the ‘X’ and clearing a compound one night, to conducting long-range patrols to a distant target the next. In a place like eastern Afghanistan, the nature of the fighting can be as varied as the landscape itself.

The ability to quickly tailor a rifle to meet individual mission requirements, as opposed to being stuck with a 14-inch standard barrel for every op, was a welcome change for many of the Rangers in C Company. By the time the four-month deployment was over, the SCAR had earned their seal of approval.

With battles being fought on multiple continents in a variety of climes and a new commander-in-chief devoted to spending more money on defense, is it time for the rest of the military to consider a multi-barrel, modular rifle platform like the SCAR? We have seen the Department of Defense spend billions on far more ambitious projects in recent years, like non-stop upgrades to the Abrams tank or the hotly debated F-35 fighter. The SCAR has already been combat-tested, and fielding it throughout the armed forces could have an immediate impact on the battlefield. If the Pentagon is about to have more money at its disposal, the SCAR deserves serious consideration for force-wide issue.

The SCAR’s cold hammer-forged, chrome-lined, free-floating barrels come in three different lengths, depending on your version: the 5.56mm Mk-16 offers 10, 14, or 18-inch barrels, and the 7.62mm Mk-17 accommodates a 13, 16, or 20-inch barrel. Each barrel has an adjustable gas regulator that ensures a constant rate of fire when using a sound suppressor. Barrels are also equipped with an integrated flash-hider, which allows a soldier to stay concealed while engaged with the enemy.

When the Rangers of C Company were shooting on the range prior to their deployment to Afghanistan, the rifle consistently shot sub one-inch groups at 100 meters, which proved that the barrel — and the weapon in general — were more accurate than the M-4.

The process of switching out the SCAR’s barrel took less than five minutes with the use of an included torque wrench, and did not require the expertise of an armorer, the Rangers found. Because C Company would be clearing buildings in Afghanistan, most Rangers chose the small or medium barrel. A few, concerned about the potential for long-range engagements in the mountains along the Afghanistan-Pakistan border, opted for the longest barrel. Some Rangers never stuck with just one barrel, but switched lengths, depending on the next mission. The SCAR offered the Rangers a level of flexibility that few of them were accustomed to having.

“Due to how complex our missions were, I think the ability to switch barrels was good to have available,” recalled Jay, whose real name has been changed to protect his identity.Jay was a team leader in C Company. Jay said he ultimately stuck with the short barrel for the entire deployment, because he and his men often found themselves in close quarters combat. But, he said, it was nice to know that he had the long barrel as an option, too.

Jay raises an important point: Frontline soldiers and Marines, especially those in special operations units, want flexibility in their weapons and equipment. Many spend hours of their free time perfecting how their kits are set up.

But when a grunt receives a modular rifle and three barrels to choose from, will he take advantage of that flexibility? As an individual, not necessarily. Warfighters tend to stick with what they are comfortable with, and what they routinely train with. But the modular flexibility is valuable from a macro perspective, because not everyone in a platoon or company will use the same rifle configuration. Infantry, cavalry, even armor units could customize their small arms configurations. The SCAR could give commanders the ability to tailor their soldiers’ rifles to their mission. That, in turn, would result in a more agile fighting force.

Despite overwhelmingly positive reviews of the SCAR — and its stellar performance in combat, according to C Company’s after-action reports — the majority of the rifle’s production was halted after that inaugural deployment; the Rangers have since returned to their modified M-4s. (Currently, all SOCOM units still deploy with the 7.62 Mk-17 SCAR.) During C Company’s 2009 deployment, the platform, and specifically the multi-barrel system, suffered no significant durability issues as some feared. Its slowed production came down to cost, as all things in government do. Simply put, the Pentagon decided that giving all ground troops the flexibility to modify their weapons according to the particular nature of their missions was not worth the rifle system’s $2,500-per-unit price tag. (The Army’s most recent M4 contract with FN was for 77,000 rifles at a price of $120 million, roughly $1,558 per unit.)

“The Mk-16 does not provide enough of a performance advantage over the M-4 to justify spending USSOCOM’s limited… funds when competing priorities are taken into consideration,” officials at USSOCOM said, according to Military.com.

In retrospect, Jay agrees with SOCOM’s decision. “I don’t think it was worth outfitting an entire unit,” he said. “It wasn’t a necessity.”

For a military that endured significant funding issues under the previous administration, it’s understandable to see how commanders decided to go back to the cheaper option. Now, however, President Donald Trump is intent on spending more on defense. Some of that budget should be devoted to a more modular rifle platform. Rifles, even on the high end, cost significantly less money than most items on the nation’s defense budget. If there’s a chance to offer a soldier increased flexibility and accuracy for more money per rifle, the military should take that chance.

Soldiers and Marines are used to working with less and making do with what they have, but for their sakes as well as the nation’s, they shouldn’t have to settle for a second-best rifle or carbine. When it comes to an infantryman’s rifle, quality and flexibility are of paramount importance; this is not an area where we as a nation should be trying to tighten the budgetary belt. “Without me, my rifle is useless. Without my rifle, I am useless,” the Marines say. Our military expects its combat troops to be the best in the world. We should hold our military’s battle rifles to the same standard.